A Bump in the Night

A Bump in the Night

Would you know what to do if you heard scratching from the wall or  thumps in the ceiling? Your quick reaction could mean the difference between the life or death of an animal(s) and whether there is damage to property from the animal’s activities or from its decomposition.

If you didn’t hear animal activity until March – April – May, I can guarantee there are babies in the attic. Even if you don’t hear babies – they are there. The worst thing that can be done is to trap and haul off the mother.

The first step in dealing with an animal incursion is to determine the species of animal. Many techniques are common across the board, but a faster solution can be reached if you know what you are dealing with.

Rats and mice sound like a scratching that moves along the perimeter of the room or up and down walls.  Inspection of the attic will reveal droppings against a vertical surface. Rats and mice show an extremely strong preference to move along  walls.  Mice will leave dropping that are half the length of an uncooked grain of rice, rats will leave a dropping that is as large as a cooked grain of rice or larger. It is important to know what size rodent you are dealing with.

Many believe that rat poison is a “no muss, no fuss” solution. Nothing could be further from the truth. It is a gruesome death as the animal bleeds out internally. The mythology is that rats eat the bait, then leave in search of water.

The problem is that they often don’t leave and if they die in an enclosed space, the stench and subsequent clean up is mind-blowing and can be expensive in that sometimes the surrounding structure has to be removed and replaced to rid the building of the smell.

Even if they do leave, you are not out of the woods – your dog, cat or a wild animal could eat it and die. Hawks, eagles and vultures are particularly vulnerable.  Babies who nurse off of a poisoned mother prior to her death can suffer  severe neurological damage or death.

Glue  traps are especially cruel and often don’t kill. If not placed in an attic they can often capture unintended animals like birds and small snakes.  Surviving victims can be removed with a vegetable, baby or mineral oil.

So – what do you do? First, make sure that you are dealing with mice or rats. Select the proper size snap trap and place them along the wall where the droppings were found. Be sure to check the traps daily.  WR&E is loath to recommend lethal methods, but with respect to rats and mice in a habitation, there really is no other option. They won’t leave because they are harassed like raccoons will and they are extremely difficult to live trap. Once the attic is free of mice and rats it is time to turn your attention to finding and closing all possible entrance points.

O.K., so you’ve determined that the bump wasn’t caused by a rat or mouse – now what?  Look for possible points of entrance and sprinkle flour or baby powder in the vicinity to capture paw prints.  Now you know what you are up against.

Squirrels have a central pad like a dog or cat and five toes on the front feet and four on the back feet. The back feet have two additional small pads behind the central pad.

Raccoon front feet look like little human hands tipped in claws, the back feet have five toes and an elongated heel.

Opossum front feet have five toes which blend into the central pad. The back feet are unique in that they have 4 toes and a fully opposable thumb. The thumb will be at  90 degrees or more perpendicular  to the toes. 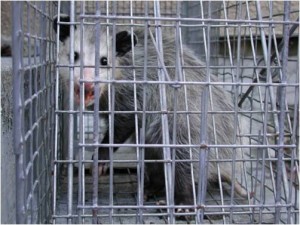 The opossum is probably the most unfairly maligned of God’s creatures. They are a major component of the ecosystem. Personally, if I could choose only one animal for my backyard – I would  select an opossum. They are the environment’s housekeepers. They keep the world clean by eating everything in its path. If you are feeding animals outside, they will clean that up too. In fact, you’ll probably see your cat sharing its bowl with the neighborhood cat..

Opossums and dogs don’t generally have such a good relationship. However, I’ve never seen an opossum that won that contest. Despite their toothy snarl and intimidating growl, they are almost all bark and no bite. They will bite if molested, but I’ve never known one to attack unprovoked.

While not the most beautiful of God’s creatures, the opossum grooms constantly like a cat. So they are very clean and carry very few parasites (like fleas). In addition, because their body temperature is lower than other mammals, they carry very few diseases that can infect humans or their domestic pets.

The opossum is our only marsupial. Babies are born in an almost embryonic state. They have to negotiate the distance from the birth canal to the pouch unassisted.  The Wildlife Center of Texas considers a baby opossum to be large enough to be on its own with it is 9 inches from the nose to the base of the tail. 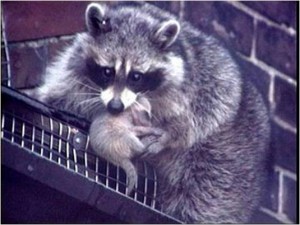 Raccoons can often be pestered into moving when their area is invaded by your presence, light, sound and odors. Some report success with artificial predator  urine (available in stores that sell hunting supplies). The idea is to make the current location as inhospitable as possible. Audio and visual repellents only work only for the short-term. If possible use motion or infrared sensors to activate noise and lights. Any animal can figure out that something that normally would scare them – won’t –  if it doesn’t move or change. This is why pigeons eventually will take roost on the fake owl that is supposed to scare them away. Specific techniques can be found on our website www.WildlifeCenterofTexas.org under the “Need Help?” tab.

If the incursion happens in the spring or summer, please keep in mind that there are probably innocent babies involved. If trapping and release is being considered,  please take into account that the babies will suffer. Consider delaying the removal of the adults until the babies can fend for themselves. Our knowledgeable volunteers and staff can give advice and instruction on how to handle specific situations.

No animal incursion can be successfully stopped until the entry points are closed. Again our volunteers and staff are an invaluable resource. Additional information can be found on our website www.WildlifeCenterofTexas.org under the “Need Help?” tab, Peaceful Coexistence and Prevent Unwanted House Guests.

This fall take a few minutes to inspect your home. Helpful tools include a ladder and a pair of binoculars. In addition to the obvious holes, examine exhaust pipes that penetrate the roof to see if mice or rats are lifting the flashing to gain entrance. Examine the attic for signs of animal habitation. Sometimes droppings or disturbed insulation will give clues to where the animal is getting in.

Animal incursions are the perfect example of “an ounce of prevention is worth a pound of cure”.