All The World is a Stage

All The World is a Stage 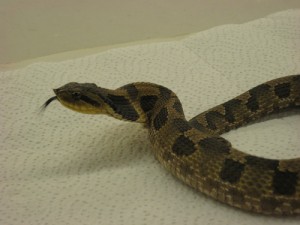 The Wildlife Center receives creatures of enormous talent.  Not only do world-class songsters pass through annually, but so do masters of disguise, phenomenal architects and all too often, expert escape artists.  Topping the bill for actors, however, is the Hognose Snake.

The Eastern Hognose Snake (Heterodon platirhinos), is a snake common to the eastern half of North America.  It is considered non-venomous, but toads would probably argue that point. Venom has been found in the saliva, but it only seems to affect toads and small amphibians. It is easily identified by its turned up nose. Coloration can range from sandy to almost black, but they are usually spotted shades of tan, copper and brown. Our current patient leans more toward shades of dark green and brown.

Not considered an aggressive creature, it will put its acting skills to use when confronted.

Act 1 begins with the flattening of the body and the adoption of a fierce open-mouthed display.  This often includes surprising audible hissing.  Common names for the Hognose include the hissing adder or puff adder.  To the uninitiated, there is no doubt that this snake is venomous and mean as …well…a snake. More than one person has mistaken the act to be that of a cobra’s, a snake not found in the New World.  Strikes may also be attempted by the Hognose, but these invariably take place with the mouth closed.  If this aggressive bluff fails, the Hognose moves on to Act 2.

Act 2 involves the release of a foul-smelling musk and fecal matter and begins to writhe in death throes.    All of this is meant to send the signal that it is patently unappetizing fare – not only does it smell dead, the death throes leads one to wonder what horrible disease killed it.

Act 3 If the would-be predator sees through all that, the snake progresses to the next  act in its repetoire; it dies.  In a scene worthy of Olivier, the Hognose’s death is played to perfection.  After twisting and turning, the Hognose will roll over on its back.  It will emit more of the musk, to the point that flies will be attracted to the body.  The tongue will hang out of its mouth and a few drops of blood may even be produced.  It attempts to advertize the fact that it is not only dead, but rotten.

Should a human observer fail to appreciate the drama of the situation and roll the Hognose back onto its stomach, it will immediately return to its back as if to say, “Are you going to believe me or your lying eyes?”  Unlike the opossum whose “playing dead” is not consciously controlled, the Hognose will slowly lift and rotate its head to see if the danger has passed. If not, the snake quickly snaps back into its dead pose.  Once the perceived danger passes, the Hognose will resurrect itself and depart the stage. 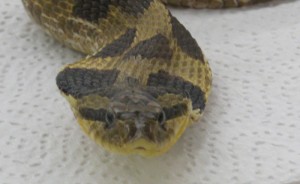 The most recognizable feature of the Hognose is its pug nose, hence the name.  Even the species name, platirhinos, means flat- or broad- nose.  It uses this “nose” in much the same manner as its namesake.  It roots under leaf litter for its prey items, various small vertebrates, worms, slugs and insects.  Its primary food item, and the one it is specially adapted for, is the toad.  Toads are not a common food item for other predators.  Their skins host a variety of toxic chemicals.  The Hognose snake is immune to these toxins.

Toads have several successful defensive behaviors, as well.  Anyone who has handled a toad will recall the first one which requires the handler to locate a towel.  The other useful tactic they employ is to inflate their bodies.  This would ordinarily work against a narrow-necked creature, but the Hognose has yet another trick to deploy, as evidenced by their genus name, Heterodont.  The Hognose snake has the typical dentition of a non-venomous snake, rows of small backwardly curved teeth.  In the very rear of the mouth, it possesses four very different teeth, hence the heterodont name, different-toothed.  These teeth are five times the length of the others probably the source of venom. Stories of “toad popping” are common, but the truth is probably that the venom acts on the nervous system allowing the snake’s neck muscles to squeeze out the air before ingestion. 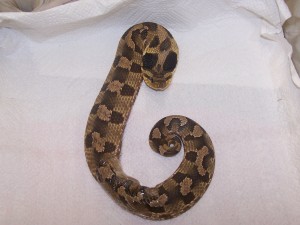 The Hognose is a common patient at the Wildlife Center, they are usually curious and docile. This Hognose was received at the Wildlife Center after an unlucky encounter with a string trimmer. Maybe it’s the wound or maybe this is an unusually reactive individual, but its exhibiting these protective behaviors on a regular basis.   Its wound has been dressed and it remains under observation to ensure that the laceration heals cleanly.  Hopefully it will soon be back in the wild pursuing toads.  In the meantime it continues to perform its act for an appreciative audience of caregivers.