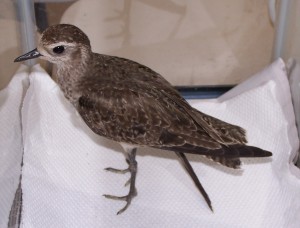 This medium sized plover boasts one of the most incredible migrations.  While many migrating birds visit twice during the spring and fall, the American Golden Plover uses a circular migration route.  Therefore it travels through the Houston area only in the spring. In the fall the plover flies offshore from the East Coast of North America nonstop to South America flying over the Atlantic and Caribbean Sea. The American Golden Plover’s wintering grounds in South America include Patagonia, Bolivia, Paraguay and Argentina. They have one of the longest migration journeys which covers 25,000 miles.  It is amazing that about 2,500 miles of this is over open seas where the plover has no chance to drink or eat.

When these migrating flocks were timed, they ranged in speed from 60-70 m.p.h.  In the spring, the northbound birds pass through Central United States stopping to stage in large numbers before their final push up into the northern arctic tundra regions of Alaska and Canada where they will nest and raise their young.

The American Golden Plover’s arctic breeding grounds provide safety from humans and many predators due to the starkness of their habitat. They nest on the ground in open dry areas.   As soon as they arrive on their breeding grounds, males begin their territorial display flights and pair bonds take place.  The males make a nest scrape and line it with soft lichens.  The females produce four eggs. There is an interesting split of incubation duties, females incubate by night and the males incubate by day.  The chicks, like most ground birds, are precocial and feed themselves with a few hours of hatching.  Both parents stay with the young until they are ready to fly. The plovers like to run, stop, run and peck on the ground when foraging.  They eat small crustaceans, insects, berries and seeds.

From a conservation point of view these birds are safe on their breeding grounds but due to pressures from agriculture and urbanization, migration and wintering grounds see a decline in numbers .  Market hunting in the 19th and early 20th centuries caused a major decline in the plover’s numbers (one journal entry described a single day’s kill near New Orleans to be 48,000 in the 19th century), since then it has rebounded, but has not recovered to its historic numbers.  One reason may be the limited loss of its wintering habitat.

A description of this bird marks it in the medium to large shorebird category.  They have moderately long legs and short neck and bill.  The head is large and rounded.  Adults have a golden and black speckled back with S shaped black from head to under tail.  A good identifying mark is the broad white stripe from over eyes and forehead that extends down sides of the neck.  Wintering adults are paler and lose the distinctive black.   Juveniles are similar to winter adults.

When doing the research for this article it was interesting to find a suggested factoid that “A comparison of dates and migratory patterns leads to the conclusion that Eskimo Curlews and the American Golden Plovers were the most likely shore birds to have attracted the attention of Christopher Columbus to nearby America in early October 1492, after 65 days at sea out of sight of land. (http://en.wikipedia.org/wiki/American_Golden_Plover#cite_ref-NPWRC_3-0)

Our visitor to the Wildlife Center was found at Hobby airport with an injured wing.  The wing was repaired and it is hoped that it will be released, if not it will be placed in a facility that is approved by the federal government for keeping a non-releasable plover.