Someone reported that an armadillo was injured in the road. Houston SPCA rescue jumped to its aid. 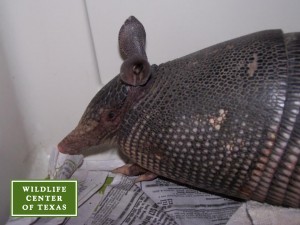 The armadillo was found in the road covered with ants and circling. The armadillo was brought to the Wildlife Center and veterinarian exam revealed head trauma and road rash. It will be on medications for several days and then when given the okay, will be released.

It will be released out in the country, away from roads and near a water source. A great big Wildlife Center thank you to the person who made the report and the Houston SPCA rescue driver, who allowed this armadillo a second chance at life.

The Wildlife Center has been receiving many calls about armadillos digging up their gardens. We remind people that during the drought our well watered gardens are inviting to the armadillos who like to dig in our normally moist soil in yards and woods. The drought has pushed them into our gardens. We have several tips on our website on how to co-exist with them.