Until I became a wildlife rehabilitator, my experience with armadillos was limited to squished little bodies on country roads, one bouncing through a soccer field and my great-grandmother’s macabre but fascinating armadillo skin basket.  Somewhere in the back of my mind, I knew they were mammals, but it was hard to imagine those armor plated little tanks reproducing, much less giving birth to live young and nursing them. 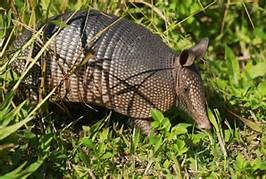 Like the under-appreciated opossum, the armadillo came along very early in the evolutionary timeline and hasn’t changed significantly since. The armadillo’s most distinctive feature is its armor plating, however its sticky tongue, reproductive behaviors and methods of crossing bodies of water are strange enough to amaze.

The nine banded armadillo is so named for the nine “plates” or scutes in-between the larger anterior (shoulder) and posterior (hip) scutes. The tough connective skin between the scutes makes it appear to be able to curl into a ball, however only one of the twenty species is capable of this feat. The bony plates can not grow and are not shed or molted, so young are born with soft plates that slowly harden until it is full grown at approximately a year old.

Armadillos are primarily insectivores, showing preference for grubs, beetles and ants. However, when insects are not as plentiful, the armadillo shifts to a diet of berries and other vegetable material, small amphibians and carrion maggots. The armadillo is often accused preying on ground nesting birds and their eggs. While a hungry armadillo won’t turn down an egg breakfast, reports show that ground birds and their eggs constitute less than 0.04% of their overall diet. The armadillo has an amazing sense of smell that allows it to find prey up to six inches undergr 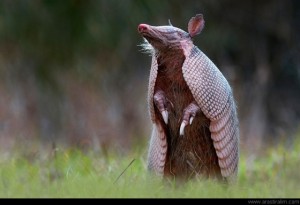 The armadillo has two distinct digging styles, the first involves massive earth moving capability and the other dainty little holes shaped like a cone. The armadillo is equipped with massively powerful excavating claws that rapidly dig burrows for shelter and in search of food. This behavior is what brings it into conflict with humans most frequently. The second type of hole is dug in search of food and is usually three to four inches in diameter and conical in shape.  The holes originally yield insects, but are frequently rechecked as they become traps for additional insects that blunder in. The armadillo’s long, sticky barbed tongue is uniquely designed to snatch up insects.  The tongue is kept sticky by a salivary bladder that is controlled by skeletal muscles. 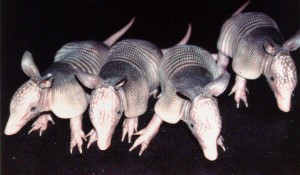 Armadillo lead relatively solitary lives but do seem to find each other in June or July to mate. The female usually ovulates a single egg which is fertilized, however, the embryo usually doesn’t implant until November and when it does it divides twice to form four identical babies which share the same embryonic sac and placenta.  The babies are usually born in March or April; eyes open and ready to move around the leaf lined underground burrow. The delayed implantation appears to be an evolutionary adaptation to stress. Researchers have documented live birth in animals that have been in captivity for up to two years. Armadillos do not always give birth to identical quadruplets, like mammals that usually give birth to a single offspring, the female might ovulate multiple eggs or an embryo may prove to be unviable. Therefore, while exceedingly rare, litters from three to seven have been documented.

Why did the chicken cross the road? To show the armadillo that it could be done. But how does the armadillo cross water? Well, if it is a stream, the heavy armadillo simply grabs a deep breath and walks across the bottom. The little tanks’ can hold their breath for a remarkable six minutes. If the body of water is too large to cross in one breath, the armadillo swallows sufficient air to inflate its stomach, increasing its buoyancy so that it can easily swim. The problem is on the other side in that it can take several hours to burp up the extra air.

The armadillo doesn’t look like a good high jump candidate, but in fact, it can flex its powerful body to launch itself straight up. This unexpected behavior often startles a would-be predator long enough for the armadillo to scuttle into a nearby thicket. Natural selection has favored squirrels that zigzag erratically and armadillos that leap at the least provocation, however both behaviors make them more vulnerable to cars.  Slowing the car is often not enough to save an adrenaline drenched animal, simply stop the car until the coast is clear.

Like the opossum, the armadillo has a lower metabolism and body temperature; therefore diseases that are optimized for the higher metabolism of most mammals do not infect the armadillo. The glaring exception is the bacterium that causes leprosy. In humans, leprosy affects extremities that due to lower blood flow are cooler than the core temperature. Because of the armadillo’s lower body temperature and relatively weak immune system, the most virulent leprosy bacterium grows aggressively. Thanks to the lowly armadillo, we now have a vaccine to protect humans against leprosy.

It may seem odd, but the nine banded armadillo is a popular research animal. Double twinning reproduction provides four identical animals, one of which can be used as a control. This ensures that any differences between experiments are due to the experiment itself and not the animal’s genetics. The armadillo has also proven to be a good model for several other human diseases and conditions including the study of multiple births and other reproductive issues, skin and organ transplants, drug metabolism and testing of potential cancer causing agents.

Despite its designation as the state’s official small mammal, the nine banded armadillo is a relative newcomer to Texas having slowly expanded its territory from Central America into Texas during the late nineteenth century.  Because of its voracious appetite for insects, it was intentionally introduced to Florida in the 1920’s.  The armadillo’s naturally slower metabolism lowers its resistance to cold and because the bony shell doesn’t provide good insulation its expansion is limited by the severity of the region’s winter.

Like the odd-ball (but unrelated) opossum, if you find an armadillo in your yard there is a reason – you have bugs and lots of other wonderful things to eat. Thank them for helping to preserve your yard from marauding insects. Neither the opossum nor the armadillo are the most beautiful, warm, cuddly of animals, but both are crucial to the balance of nature.  Typical exclusion techniques work well for problem armadillos, contact a member of the Wildlife Center of Texas for details.