Anyone who has moved a wheelbarrow and found a hissing and spitting opossum underneath understands the jolt of adrenaline such an encounter produces. When faced with such an aggressive display, it is hard to remember that the opossum is more frightened that you. Think that opossums are disgustingly ugly? Tempted to chase them out of your flowerbeds? Don’t – they are voracious insect and grub eaters.

OK – so it’s ugly. But don’t let its lack of good looks fool you, it is the single most important animal you can have in your yard. Nicknamed the living fossil by scientists, the opossum dates back to the days of the dinosaur. The name “opossum” is derived from an Algonquian Indian word “apasum”, meaning white animal. The opossum’s face is usually white while the body coloration can range from almost white, through various shades of gray to black. Most of the guard hair is agouti (banded) which means that the hair starts growing one color then change color one or more times before it sheds.

The only marsupial (mammal with a pouch) living in North America, the opossum is a unique and fascinating animal. The scientific name, Didelphis virginiana means “double womb” which refers to the pouch as the secondary place of fetal development. Virginiana refers to the state of Virginia where the opossum was first observed by early English colonists. 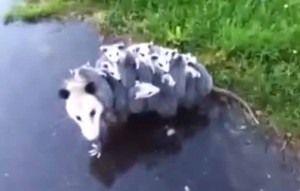 Opossums are born after a gestation period of only thirteen days. Blind, embryonic in appearance, and about the size of a bee, the newborn opossum crawls unaided to its mother’s pouch, where it attaches to a nipple. The nipple completely fills the tiny opossum’s mouth, firmly attaching it to its mother. The opossum then remains in the mother’s pouch for another seven weeks, until it is large enough to detach itself from the nipple. Mother opossums carry their babies on their backs, each night, when they prowl for food. The babies strike out on their own fairly early, a opossum that is nine inches from nose to the base of the tail is considered old enough to on its own.

In captivity, opossums can live five to seven years but in the wild the lifespan is much shorter. A successful adult can live three years in the wild, but a lifespan of a year to eighteen months is much more common. The opossum is a frequent prey animal and suffers additional pressure from humans, dogs, cats and cars. 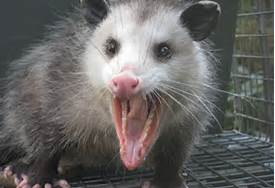 The opossum is not nasty or dirty, even though it sometimes looks “flea bitten”. Quite the opposite, like cats, they are fastidious and constantly groom themselves. However, despite its best efforts, it always looks like it needs a shampoo and blow-dry. 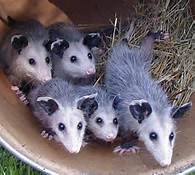 Because of their appearance, many people think it must be carrying a host of diseases, but the fact is the opossum is resistant to most diseases.  The body temperature of a opossum is lower than other mammals, therefore, many diseases can’t multiply fast enough to overwhelm the opossum’s excellent immune system. Therefore it carries almost no diseases and even if it succumbs to a disease, it usually can not transmit the disease. They are considered a dead-end rabies host, in other words, you can’t get rabies from an opossum.

Another myth of the opossum is the iconic picture of it hanging from a tree by its tail – only the very young can pull this stunt. They usually wind up in this predicament because of a miscalculation – not on purpose. The prehensile tail is used to carry nesting material, food, and stabilizes the opossum for climbing. Despite their clumsy appearance and weird slow motion walk, the opossum is an excellent climber. Special raised pads on the paws and fully opposable “thumbs” on the rear feet make the opossum agile climbers.

Opossums are sometimes referred to as the sanitation engineers of the forest. The creator gave them the job (which they take very seriously) of cleaning up anything remotely edible. I don’t know if they hate us or love us for being so messy. We leave containers near our houses (better known as trash cans) that are full of wonderfully smelly things to eat, we leave food outside for our animals that hasn’t been eaten, we feed the birds who wastefully leave seed on the ground and we don’t clean up the windfall from our fruit trees, nut trees or berry producing bushes.

They are an omnivore leaning towards carnivore and will eat almost anything. They are the only mammal that routinely dines on poisonous snakes. Because of their slower metabolism, they are not as susceptible to the venom. They also eat beetles, ants, grasshoppers, grubs, earthworms, lizards, geckos, frogs and fresh carrion.

The animal responsible for turning over trash cans, dragging them half-way across the yard and prying open the lid is the raccoon, not the innocent opossum you see munching away in it the next morning.  I’m not suggesting opossums are blameless for they are not above crawling into trash cans (from which they can’t escape) and accidentally turning them over. Don’t be alarmed if you find a opossum in your trash can, simply tip the can on its side and leave for 10 – 15 minutes. When you return, your visitor will be long gone.

As for the raccoon, they are almost as hard to out fox as squirrels (better known as bird feeder bandits), however, the trash can is relatively easy. A strong bungee cord stretched from one handle, through the handle on the trash can lid to the opposite handle will deter most raccoons (and dogs). If there is a problem with trash cans being turned over, loop a rope around the can passing it through at least one handle and tie it to the fence or other large object.

The opossum, while not the most beautiful of animals is extremely beneficial to the environment. Should an animal become a nuisance, the Wildlife Center of Texas can provide techniques to exclude the animal from the area in question, they should not be live trapped or harassed. Despite our efforts to educate the public, disinformation abounds. Until the general public accepts opossums as the wonderful animals they are, the Wildlife Center of Texas needs your help to educate your friends and family.