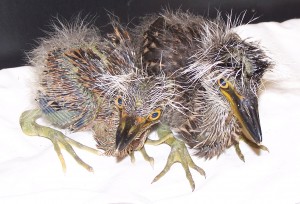 “Fish and visitors smell in three days” (Benjamin Franklin)…but so do Yellow-crowned Night Herons. The annual flood of herons has begun at the Wildlife Center.  Herons are one of the few BIG EXCEPTIONS to the “place the baby bird back in the nest or in a substitute nest and see if the parents come to feed it” rule. Herons NEVER attend to a baby that has fallen from the nest. Every year the Wildlife Center receives over one hundred of these prehistoric looking creatures. In the Houston area these birds nest at the tops of old oak or pine trees 70 feet in the air.  In other biospheres, herons don’t nest so high, some even nest on the ground. Their nests are big messy affairs that sometimes fall apart. Should this happen, the fall usually injures the babies.  Once on the ground their body temperature plummets and the nestlings rapidly become hypothermic. These compromised babies are good candidates for maggots that hatch from fly eggs. A baby that could have been saved sometimes has to be euthanized because of the tissue damage done by the maggots.  It is important to keep these babies warm and get them to the Wildlife Center ASAP.

Night Herons really eat at night! Seriously unusual behavior for waterbirds. During breeding season when dietary requirements are much higher they are frequently are seen during the day. They are often seen in flooded plains, suburban drainage ditches and around water detention ponds.  They exhibit strong nesting site fidelity which means they return to the exact same nest year after year. Young inexperienced birds do their best, but the nests are usually flimsy and small. Each year the nest is improved. This leads to huge messy nests. 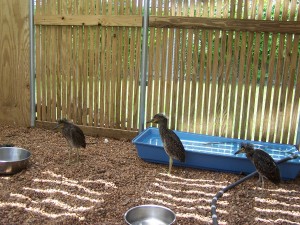 Some homeowners rejoice when the herons return each year, others are not so receptive. Since herons and egrets are fish eaters, the area around their droppings can smell like bait left out too long in the sun. However, whether a fan or not, all migrating birds are protected by international treaty. The treaties don’t care if a specific population migrates, only that the species migrates. What this means to a home or landowner is that once the nest is built, the birds must remain unmolested. It doesn’t matter if the homeowner planned to cut down the tree or a developer was going to raze the land for a new shopping center, the nest and birds cannot be disturbed without the express permission of Texas Parks and U.S. Fish and Wildlife. A legal “take” must be arranged and supervised by state or federal wildlife officers.

If you are not a fan of a bird that is nesting near habitations and the nest has already been built, there is little that can be done to get them to “move on”.  However, it is the perfect time to observe their behavior and contact the experienced volunteers at the Wildlife Center for advice about next year.

The adult Yellow-crowned Night Heron to the left is characteristic of birds seen in the wild. The yellow crown can be seen when the bird lifts the feathers on top of the head. This display is seen when courting and when annoyed or startled.