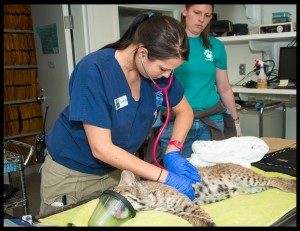 The adult male bobcat that was rescued from the Friendswood area back on December 12, 2012 was transported to the Houston Zoo to undergo a root canal on February 20, 2013 (click here to see a video of his prior treatment). Several of his teeth were in poor condition and a root canal was performed to prevent infection. The 2-hour long procedure was performed by Dr. Maryanne Tocidlowski of the Houston Zoo and Dr. Frank Shuman of the Houston SPCA. To prepare the bobcat for surgery, he was sedated, blood was drawn and x-rays were taken. The dental work involved 6 root canals which comprised 4 canines and 2 premolars. The procedure involved drilling a hole in the top of the tooth, filing down the area around the hole, cleaning out the canal and disinfecting and drying the entire area. The hole was filled with an inert latex-like compound and the hole was capped with a resin based dental restorative compound. After the surgery, the bobcat was safely transported back to the Houston SPCA where he is being monitored by our veterinary staff.

While in the care of The Wildlife Center of Texas and the Houston SPCA, the bobcat has been treated for and recovered from flea infestation, a bacterial infection and sarcoptic mange. The bobcat was also severely emaciated and over the course of six weeks, he has gained 15% of his initial body weight. We will continue to monitor his progress until he is ready to return to his native habitat.