Bunnies Hop to the Wildlife Center

Bunnies Hop to the Wildlife Center 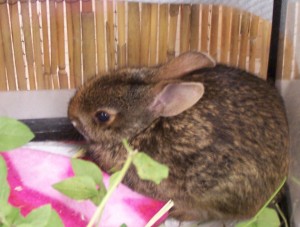 Baby bunnies come to the Wildlife Center for many reasons. When the rains are plentiful and the grass is lush, most of the babies are kidnapped from mother rabbits by well meaning homeowners. For more information, two articles have already been written on this subject.  http://wildlifecenteroftexas.org/2011/03/bunnies-bunnies-everywhere/ and  http://wildlifecenteroftexas.org/2010/06/two-for-tea/ When drought occurs, more care must be taken, because it cannot be assumed that unattended young are well cared for. Call the Wildlife Center at 713-861-9453 for assistance.

Baby bunnies are one of the more difficult mammals to rehabilitate since they do not nurse per se. They also nurse very slowly and take four to five times longer to feed than a squirrel or raccoon of the same age.  Very young bunnies must be placed with our permitted rehabilitators and cared for at their homes since they require feeding into the night. Once the bunny can go from six p.m. until seven a.m. without feeding, it can come back to the Wildlife Center for care.  Our off-site rehabilitators are our unsung heroes since they accept animals that are too sick, injured or young to thrive at the Wildlife Center.

Lagomorphs superficially resemble rodents, but differ in several ways. The most obvious is the unusual arrangement of the front teeth, behind each prominent incisor is a small peg-like tooth. Like rodents, lagomorphs must constantly wear down the front teeth, otherwise they can grow to the point that the animal cannot eat. The order Lagomorpha includes the family Leporidae which include rabbits and hares and the family Ochotonidae which include pikas.

Texas is home to two genera and five species of rabbits and hares. Three species can be found in the greater Houston area. Two species are limited to west Texas. Rabbits are smaller than hares and give birth to altricial young. Altricial means that the young are born helpless and need constant care. Hares give birth to precocial young.

The two most common rabbits found in our area are the Swamp Rabbit (Sylvilagus aquaticus) and the Eastern Cottontail (Sylvilagus floridanus). While the Black-tailed Jackrabbit (Lepus californicus) is widely distributed, it is seldom seen in the area or at the Wildlife Center. These mammals are diurnal (daytime) or crepuscular (dawn and dusk) and are almost entirely vegetarian. Their diet puts them in conflict with gardening, grazing, agriculture and forestry activities.

The Eastern cottontail is a relatively large cottontail that can weigh two to four and one-half pounds. They are commonly seen in suburban neighborhoods. Unlike other rabbits, the Eastern cottontail will continue to forage into the night. They are very secretive and shy. The world is a very scary place for bunnies, the threats come from the sky in the form of the larger hawks and owls as well as from the ground in the form of cars, dogs, cats, coyote, raccoon and other predators.

Eastern cottontail breeding can occur year-round in this region, but increases when the weather is warm and vegetation is vigorously growing. A healthy female with adequate food can rear four to five litters a year each consisting of up to eight young. The average litter size is four. Predators love to eat bunnies, so mom only visits the nest to nurse her young. Baby Eastern cottontails are easily distinguished from baby Swamp rabbits in that they usually have a small white dot on top of the head that disappears as the bunny grows up.

Little is known about the diet of the Swamp rabbit, but it is assumed that it is vegetarian in nature and similar to the Eastern cottontail. Their chief protection is the brush and brambles of creek bottoms and poorly drained bottomland. They rarely flush, even when chased by dogs.

The other unusual habit of the Swamp rabbit is that it willingly swims. It is well adapted to its semi-aquatic environment with a water-resistant coat. Creeks and even rivers do not pose a barrier to these rabbits.

The breeding season for the Swamp rabbit extends from January to September, but peaks in February and March. They produce one to three litters per year. Each litter is two to three young.  While considered precocial, the babies are actually born with their eyes and ears closed. The eyes and ears open and they are able to walk in two to three days.

Because of their larger size and preferred environment, the Swamp rabbit has fewer and different predators than the Eastern cottontail. Alligators, Coyote, Fox and Great Horned Owl top the Swamp rabbit’s predator list.

This year is drought is so severe that volunteers are walking a half mile or more to find tender juicy grasses, weeds and flowers to feed weaning rabbits. The babies brought to the Wildlife Center are almost always dehydrated and under-nourished because the mothers are struggling themselves. To ease the suffering of wildlife, keep your lawn watered and provide as many different types, sizes and heights of water dishes as possible.