Beavers (Castor canadensis) alter their environment to fit their needs to a greater degree than any other animal besides man. Their conversion of densely wooded streambeds to wetlands and finally to nutrient  rich meadows is an ecologic miracle.  Whether you consider the beaver to be an engineering genius or a tenacious pest that is ruining a beautifully wooded stream depends on exactly where the beaver “is being busy”. 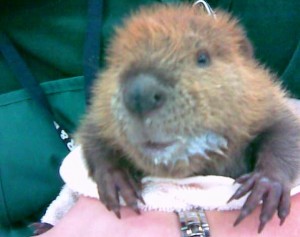 Known to the American Indians as “sacred center”, beavers create rich habitat that act as a cradle for biodiversity. Wetlands provide habitat for almost half of all endangered species and their biodiversity is rivaled only by rainforests. Wetlands sponge up flood water, prevent erosion by slowing the progress of flowing water and raise the water table. Wetlands also act as earth’s kidneys to purify the water by providing natural “settling ponds” where bacteria can break down toxins and remove excess nitrogen from the system.

Beaver vary in weight and size based on their habitat with the larger, heavier individuals living in colder climates. On average the beaver is 20 – 60 pounds and has a body length of 30 to 40 inches long and a tail length of 10 – 13 inches.  Pairs mate for life during their third year and can live twenty or more years. They have a single litter per year which consist of two to four kits (up to six have been documented) that weigh about a pound each after a gestation of 110 to 120 days. Kits are born with open eyes and begin swimming within weeks of birth.

Beaver families consist of the mated pair, the yearling kits and the current litters. The yearlings babysit the current litter freeing the parents to search for food and maintain the dam and lodge. At three years of age, the kits leave home to venture out to find mates.

Beavers are strict vegetarians and prefer herbaceous plants. Favorites include water lily tubers, clover, grasses, leaves, berries and green bark. Contrary to popular belief, beaver do not eat wood. Unable to climb, beaver must fell the tree to continue their meal. Once the tree is stripped it is usually used to shore up the dam, build a second dam or expand the lodge. Beaver prefer fast growing trees that are two to eight inches in diameter, but have been known to fell trees as large as thirty inches! Logging and hauling trees to the final destination is dangerous business – for people and beavers.

Beaver have two driving needs; deep water to provide protection from predators and plenty of water vegetation, herbaceous plants and tree bark to satisfy a high metabolism. How individual beaver families satisfy these needs can be surprisingly different.

Quintessential beaver dams are built in shallow valleys to create deep slow water. If the creek is small, the dam will be built straight across, however, if the creek is larger, these amazing engineers construct a structurally stronger curved dam.

The dam is not the living quarters, the lodge is constructed integral to the dam or by itself near the center of the beaver pond or existing pond. Lodge construction involves logs set in a teepee shape and usually involve multiple “rooms” for living and food storage. The sides are weather proofed with smaller twigs, leaves and mud. The lodge will have multiple entrances for quick escapes.

Some beavers don’t build dams or lodges, instead they dig dens into the bank of a river. Similar to a lodge on the inside, their home will have multiple entrances that are hidden in deep water. 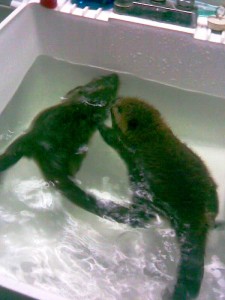 Effortless swimmers, beaver can breath-hold for as long as fifteen minutes. The flat tail is used as a rudder or slapped against the water surface as a warning of danger. Like the opossum, the overall nutrition of a beaver can be assessed at a glance because they store excess body fat in the tail.

The eyes are small with respect to the overall size of the beaver and it is believed that eyesight is relatively poor. The senses of hearing, smell and touch are highly developed. Nostrils can be closed when swimming or diving.

Beaver come into conflict with humans when harvesting trees and flooding interfere with the planned land uses of humans. Dams can flood roads, fields and homes, but if the beavers are removed from an otherwise desirable habitat, others will soon move in. It is much more effective to work “with” or “around” the beavers. U S Fish and Wildlife have the “Partners for Wildlife” program which can provide funding or materials for flow devices to qualified agencies or organizations.

Beaver incursions are self limiting because they eventually fell all of the trees and eat the vegetation within a safe distance from the den or lodge and are forced to move to new territory. They leave behind a rich wetland that provide habitat for hundreds of species including important nurseries for fish. In salmon streams, these abandoned ponds provide crucial nursery habitat. At some point the dam will break and the pond will drain leaving unusually rich soil to provide nutrition for the woodland meadow. Scrub, wildflowers and grasses will eventually yield to slower growing and taller trees. The reduction of sun to the ground will limit competition of smaller plants and grasses.  It has taken fifteen or more years for this cycle to occur, but the forest is now ready to support the next generation of beavers.