When it comes to bird feeders it’s always something. If it isn’t the squirrels eating the seed, it is the hawks eating the birds. While we all know that hawks need to eat, we just don’t want them dining at OUR bird feeders. The only way to truly make a feeder hawk proof would be to build a cage around your yard that has openings big enough for the birds, but too small for the hawks. Since that is clearly impractical what are the alternatives? 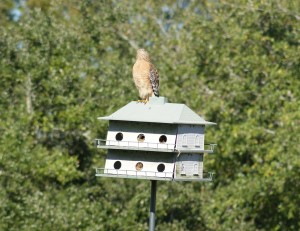 For the last 14 years a pair of Red-shouldered Hawks has called the land around my house their territory. There have probably been many pairs, but there is always a pair claiming our yard as their territory. They scream out their territorial challenge from the abandoned Martin house in my neighbor’s yard on a daily basis.

Despite this there have been less than 5 instances where a hawk or other predator has taken a bird from my back-yard. Why? Maybe I got lucky with my feeder placement, but my neighbor hasn’t complained about hawks taking his birds either. What do the placement of my feeder and my neighbor’s feeder have in common? Absolutely nothing – and maybe that is the point.

My yard has enough cover that straight line shots are minimized. My neighbor has several large trees, but they are grouped together leaving lots of straight line shots, especially from the abandoned Martin house. My theory is that I have physically made it harder for the hawks to snatch from my yard and my neighbor has made it psychologically more difficult because prey feel exposed and jumpy.

Most hawks scope out potential food sources (i.e. your birds) from a nearby perch. A few raptors hunt primarily from the wing like Peregrine Falcons, but most hang out unobtrusively to identify the specific target before committing to a dive. Once committed a raptor has very little room for course corrections.

So the place to start is a review of your backyard.

Is there a place where straight line attacks can be minimized? Murphy’s Law says this probably won’t be the picture perfect location for gazing upon it from inside the house. Is there a particular perch that can be removed (like a particular tree limb) that would deny the raptor a good vantage point?

Is there nearby cover for the birds to flush into? The longer the flushed bird has to remain airborne before finding cover, the more likely it is to be caught.  Keep in mind that birds flush UP. Hawks are observant enough to remember the escape routes and intentionally flush the birds to catch one mid-air. So there really needs to be cover nearby.

Another consideration is whether a normal flushing  pattern is obstructed or boxed in by fences, garages or the house.  Some bird species are naturally more aware of their environment and already have escape routes planned. They are nervous and flighty and won’t stay still. Birds that travel in flocks or socialize in groups use another technique to stay safe. Like fish that school, these birds “hide” within the group. When flushed they rise as one in an explosion of noisy wings. This reflexive burst can turn deadly if the bird mistakes a window for an escape route.

Windows can be deadly. If there is a particular window that is repeatedly struck, it is worth the time to determine why this window is an issue.  Especially if a bird bath or feeder is placed nearby. Look for how the problem window may line up with another window to create the illusion of a clear path through the house. The primary culprit however is probably the coating that most windows have these days that reflects a portion of the solar energy. This creates a mirror effect that can create the illusion of open space. If you have a problem window the solution may be as easy as lowering the mini-blinds halfway, hanging something pretty in the window or applying a decal or sticker.

Is there enough cover that the birds feel safe and become complacent?  Once they stop looking for trouble…trouble will find them. The feeder may be secure, but dove for example are bad about roosting in exposed locations. Use the same techniques to deny them perches that you used to deny the hawk a look out post.

The primary diet for most hawks isn’t birds, it is rodents. If they are dining at your bird feeder, sometimes it is as easy as bringing in the bird feeder until the hawk has moved on.

The web of life is complex. It is impossible to invite a single type of animal into your yard without attracting others that complete for the food or prey on the desired animal. But you can make it more difficult for the undesired animal.