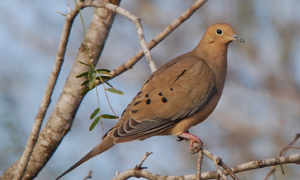 Hundreds of injured, ill and orphaned doves are brought to the Wildlife Center of Texas for care each year.  The common doves found in the Houston area consist of three native (Mourning, White-winged and Inca) and two non-native doves (Eurasian collared dove and ringed turtle-dove).   It has been interesting to watch the trend of our doves in the last three decades.  The author of this article began rehabilitation in the early 80’s, at that time the doves most common were the mourning dove and the  Inca and an occasional escaped ring-necked turtle dove.  It was rare to have a ground dove, Eurasian collared dove or white- winged dove.  Today’s order from most common would be  white-winged, mourning, Eurasian-collared, Inca, then ringed-neck turtle dove.  Urban doves have learned that city life provides unlimited food and water sources.  Many homeowners put out seed and water for these gentle birds.  Doves generally make flimsy nests so as the young ones start to develop they fall to the ground before they are ready to fly.  If left on the ground they usually fall victim to area cats, dogs and wildlife.  Mother birds will accept their babies back if you step in and help by picking up the baby putting it in an empty hanging basket and hanging it near where the original nest was.

White-winged dove as adults have a blue orbital ring and orange iris.  They are a large dove with light brown feathers and a narrow line of white showing on wing when at rest.

Mourning doves have a pale bluish orbital ring and brown iris.  They also have light brown feathers but have black spots on their primary covert feathers.

Inca dove is our smallest and all feathers have a dark edge giving it a scaly look.  They have rust colored primaries.

Eurasian collared- dove is our largest dove.  It has gray feathers with a dark crescent across the back of its neck.  This is bird was introduced from Europe in the late 70’s and is not consider a native bird to Texas.

Ground dove– is similar to the Inca but is much smaller.  It has brownish spots on is coverts

Ringed turtle-dove looks like a smaller version of the Eurasian collared-dove.  It is a caged bird that has escaped to the wild but does not usually survive very long.

Please enjoy this montage of Houston area doves in different stages of rehabilitation and then release.  Something to keep in mind: doves eat 12-20 percent of their body weight each day so keep those feeders full and if you find any injured, ill or orphaned doves bring them to the Wildlife Center of Texas for care.