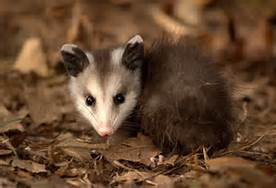 Opossum may be aesthetically challenged, but they are probably the single most important wild animal to your backyard ecology. They have remained unchanged since the time of the dinosaur. Why? Because the physiologic model is perfect for its ecologic niche and it doesn’t need to evolve to something better. So what niche does it fill? Sanitation engineer. We’ll never know if the opossum is grateful we are so messy or if they scurry around feeling harassed and under-appreciated. Either way, there is no doubt the lowly opossum should be welcomed with open arms. Why? O let me list the ways.

Let’s start out with all the things they eat that we don’t want to share our back yard with. The Opossum are an omnivore leaning towards carnivore and will eat almost anything. They are the only mammal that routinely dines on snakes, including poisonous snakes. Because of their slower metabolism, they are not as susceptible to the venom. They also eat beetles, ants, grasshoppers, grubs, earthworms, lizards, geckos, frogs and fresh carrion. They do not dig up the yard or eat your newly planted flowers, but they will eat the pests that will destroy your grass, kill your bushes and eat your flowers.

The animal responsible for turning over trash cans, dragging them half-way across the yard and prying open the lid is the raccoon, not the innocent opossum you see munching away in it the next morning.  I’m not suggesting opossums are blameless for they are not above crawling into trash cans (from which they can’t escape) and accidentally turning them over. Don’t be alarmed if you find a opossum in your trashcan, simply tip the can on its side and leave for 10 – 15 minutes. When you return, your visitor will be long gone.

Another reason to love the Opossum is that it is a very clean and healthy animal. Because of their appearance, many people think it must be carrying a host of diseases, but the fact is the opossum is resistant to most diseases.  The body temperature of a opossum is lower than other mammals, therefore, many diseases can’t multiply fast enough to overwhelm the opossum’s excellent immune system. Therefore it carries almost no diseases and even if it succumbs to a disease, it usually can not transmit the disease. They are considered a dead-end rabies host, in other words, you can’t get rabies from an opossum. 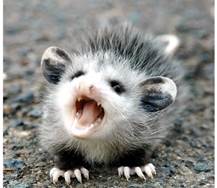 The opossum, while not the most beautiful of animals is extremely beneficial to the environment. Should an animal become a nuisance, the Wildlife Center can provide techniques to exclude the animal from the area in question, they should not be live trapped or harassed.