Twisting in the Wind 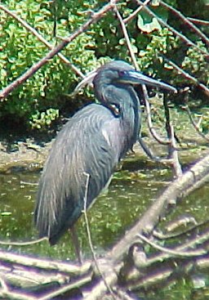 This spring, the greater Houston area experienced two violent thunderstorms that made us wonder if it was time to start building arks. It was during one of these three inch an hour storms that homeowners noticed a Great Blue Heron (Ardea herodias) was tangled by a stretchy rope to the tree it was roosting in.

The largest heron in North America, it stands 36 to 55 inches tall, has a wingspan of 66 to 79 inches and weights 4 ½ to 8 pounds. Usually ill-tempered when handled, the wickedly sharp bill is thrust without notice in defense.

The homeowners called The Wildlife Center of Texas and several volunteers braved torrential rain, wind and lightening to evaluate the situation. The Wildlife Center doesn’t have the resources to respond to most wildlife calls, but occasionally a case is so extreme and retrieval so dangerous that volunteers feel compelled. The Great Blue Heron’s predicament turned out to be much more horrible and gut-wrenching in person. The rope was wrapped around the heron’s beak and neck. Starving to death while being perched high in a tree was bad enough, but the wind was blowing it off of its perch.

Unable to reach the heron, rescuers watched helplessly as the wind and rain blew the heron from its perch, dangled by its neck, fought an exhausting battle to scrabble back onto its perch only to be blown down again. The homeowners and volunteers brainstormed (pun intended) possible rescue scenarios but the heron couldn’t be reached by climbing or by ladder.

Undaunted, the homeowners hit the phones and called a friend who owns Prono Cranes. He willing to come to the heron’s aid. To make a long story short, despite heavy rain and nearby lightening striking, the Great Blue Heron was rescued and taken to the Wildlife Center for evaluation. The heron has improved to the point that it has moved to one of the large flight cages to insure that it is eating well on its own and to strengthen its wings prior to release.