One blustery day in February, the Wildlife Center of Texas received a frantic call to aid a large white bird. Nothing unusual except – as the box was opened – there lay a huge ailing white bird unable to stand.  One of the Wildlife Center of Texas’ senior wildlife rehabilitators immediately began to stabilize the beautiful white feathered creature.

After several days of medication and therapy, the bird began to stand on its own.  As weeks of care passed, he continued to gain strength and started preening, a wonderful sight to see. Knowing that healing was well underway was further evidenced by him putting away tons (well, not literally, lets just say many pounds) of fish and strutting around his enclosure in beautiful breeding plumage.

This gorgeous bird was none other than a Great Egret. The Great Egret ‘ardea alba’ is the tallest of our four white 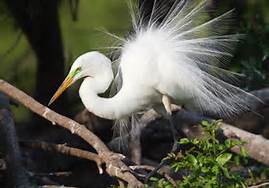 egrets (great, snowy, white morph of reddish, and cattle egret).  Maturity results in a height of thirty-nine inches and an astonishing fifty-one inch wingspan. Solid white feathers adorn the tall lanky body, a yellow bill and legs as black as coal.  During breeding season, long plumes down the birds back are present for all to see, especially Miss Egret.  Once prized for their beautiful feathers, these birds are now federally protected. The Great Egret is a slender long legged wading bird that is found in waterways around the world.

Fortunately, we have a good population of these birds on the Texas coast.  They can be found in a variety of environments from saltwater marshes to fresh water ponds. Try this yummy menu for a filling meal or a light snack consisting of snakes, fish, insects, mice, and frogs.  These lofty egrets tend to hunt alone.  Being very skilled yet aggressive hunters, they patiently wait for minutes on end until its beak stabs its prey with pinpoint accuracy.

With reduction of wetlands and other habitat, the Great Egret numbers are beginning to decline.  Preferring to nest in trees or shrubs, wetland management and protection, promote abundant opportunities for many of nature’s residents. Dependent upon weather and food supply up to six eggs, three being average decorate the nest of this magnificent swamp dweller. The eggs are greenish blue in color and notable that both parents mutually participate in rearing their young by incubating eggs as well as feeding chicks. As with many egret and heron chicks, the tendency to climb out of the safety of their nest is commonplace, leaving them vulnerable to predators.

As time progressed, both the painstaking actions of the rehabilitator and the willingness of the Great Egret to live, it was returned to the wild.  On bright spring morning it was chauffeured to a coastal site.  Upon release, the excessive wingspan gracefully flew to the east no doubt to share his story of care and restoration in the hands of the Wildlife Center of Texas.