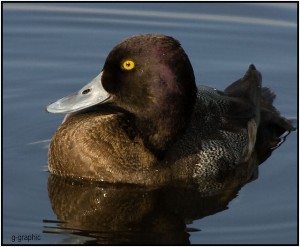 Scaup are an interesting species of diving duck, two scaup species live in North America the Greater Scaup (Aythya marila) prefers salt water while the Lesser Scaup (Aythya affinis) prefers freshwater. The Lesser Scaup is one of the most abundant and widespread of the diving ducks in North America. The males are easily differentiated because of differences in coloration and conformation. The differences between the females are less dramatic and they are usually identified by the males within the flock.

The Scaup can be easily be identified by its rich brown plumage especially the female’s head which looks like velvet, the males exhibit a sheen or iridescence of purple (Lesser) or greenish (Greater). The head is more wedge shaped and the bill is dark slate to dark brown with gray highlights. An unusual white ring of feathers encircle the base of the bill.

Without the aid of breeding plumage and the benefit of seeing both sexes telling the difference between female Greater and Lesser can be tricky. Size doesn’t help much since the Greater Scaup is only slightly larger than the Lesser, so this could be a big Lesser or a small Great. The white wing patch is usually longer in the Greater, but again we are out of breeding season, so while the smaller wing patch points to the Lesser, it isn’t definitive. The Greater tend to have a cheek patch of white which varies between almost nonexistent to prominent. This bird doesn’t have a cheek patch, so that argues for the Lesser. Both species winter on the upper Texas Gulf Coast, but the Lesser Scaup winters in much greater numbers. So statistically, the bird recovering at the Wildlife Center is probably a Lesser Scaup. Whew! Bird identification can be complicated!