Helping Us Help Them

Helping Us Help Them 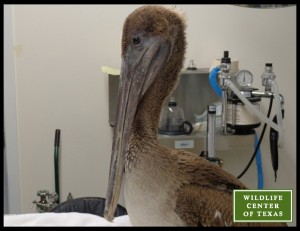 A family was spending the weekend in Galveston when they discovered an injured brown pelican.  They called to report the pelican but were not able to catch it.  Diane, a Wildlife Center of Texas volunteer, was able to rearrange her schedule and rushed to the scene on the far west end of Galveston.

She and her husband were able to capture the pelican and prepared it for travel.  The family who reported the bird was heading back to Houston and agreed to bring the bird up the freeway where another WCT volunteer met them.  The pelican was then transported to the Wildlife Center of Texas where it was found to be emaciated and full of parasites.  It is now being treated along with several other pelicans. 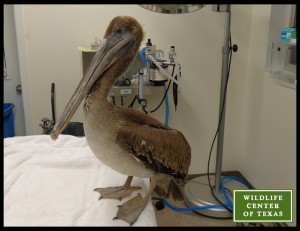 Thanks to all these people, this pelican was rescued, will be rehabilitated by caring volunteers and staff and then released back to the wild.  With the 2012 Olympics in full swing we feel they all made a great team…they get the GOLD!  If you too would like to be a part of this fantastic team to help injured, ill and orphaned wildlife please donate toward the care of all of our patients.