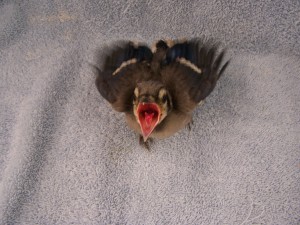 A little more than half of the year is over.  So we decided to take stock of where we are. As of the end of July, the number of animals that have been brought to the Wildlife Center is 6715. We knew that it had been a busy baby season, but *whew*.

We at the Wildlife Center cannot thank the thousands of warm hearted rescuers enough for caring  enough to go above and beyond to bring the ill, injured and orphaned to the Wildlife Center.  All of you are heroes.  Many of you have had to re-arrange schedules, bribe your teenagers to drive to us, come from over two hours away, brave weather, traffic etc. We are grateful for you.

This past month several heroes really stick out in our mind.  The first was a policeman on night duty who every time we went by a certain block, he found baby ducks in the street.  He would shoo them into the grass.  Finally, very late at night when he was off duty he went back and sure enough there they were huddled in the street again.  He gently scooped them up and brought them to the Wildlife Center the next morning.

Another story involved some residents of Tiki Island and

an injured pelican.  A brown pelican crashed into a picnic table and fell into the water. Attempts were made to rescue the pelican but it kept getting away.  Even though it had an injured wing and could not fly off, it sure could swim.  A

couple on Tiki Island, with the aid of their neighbor were finally able to catch the bird and bring it to the Wildlife Center.  The neighbor sustained some cuts to his feet during the rescue so we wish him a speedy recovery.

Another hero was a young boy who found a baby blue jay and begged his mother to drive him to get help for the bird that he had found.  Those of us at the intake desk had a warm spot in our hearts as this little boy with a tear-streaked face proudly pulled out a wadded up Kleenex with several dollars in coins, his allowance.  He wanted to spend it on helping out the bird he found.

Heroes, young and old, bless you all!