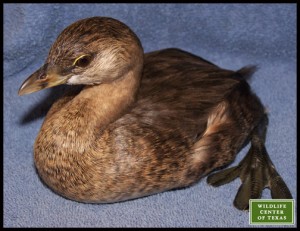 If it look like a duck and quacks like a duck, then it must be a….flamingo? The wonderful thing about research is that I learn things I didn’t know before and thanks to the internet, I don’t even have to leave my couch. When the Pied-billed Grebe (Podilymbus podiceps) came into the Wildlife Center, I yawned…thinking it was just another water bird. The initial research didn’t change my opinion, but I wanted to know more about those bizarre feet.  That question set off a cascade that led from the bird to advanced genetic analysis and biochemistry.

Instead of simplifying the classification of animals, genetics has blown the roof off. It doesn’t help that dozens of “official” definitions exist for the concept of species. Most lay people will recite the “can interbreed and produce fertile offspring” definition we learned in grammar school. Add to the mix animals that form a “ring species”, Each “species” can successfully produce fertile offspring with the “species” close to it on the ring but not with “species” across from it on the ring. It becomes even more confusing since the number of kingdoms varies from 6 to 8 depending on the convention, so phylum, class, order, family, genus and species all become a bit fuzzy. Early naturalists grouped animals based on phenotype, or what they looked like. These days the assignment of a particular “group” of animals to a species is considered a hypothesis. The wheels really come off when talking about amphibians and more simple organisms – we won’t go there.

Most “evolutionary trees” imply that animals that look alike trace back to a common ancestor. The fossil record clearly shows the same trait /adaptation frequently pops up. For example, webbed feet have spontaneously occurred at many different times in the geologic record. In other words, different “duck-like” animals can have completely different paths of evolution and may not be related to each other at all.

Now for the big reveal…grebes and flamingos are closely related and could even be sister species! Imagine, the closest living relative of the flamingo isn’t another long-legged species, it’s a duck-like bird.

Data that leave researchers scratching their heads often gets set on the shelf for contemplation at another time. In this case, researchers at two different universities, using completely different techniques came to the same conclusion and if it weren’t for the great ornithologist, Charles Silbey both results could have sat on the shelf because the researchers thought the results were too strange to be believed.

The evolutionary path for flamingo, grebe, hummingbirds and strangely enough pigeons is unclear. Ornithologists were particularly interested in the flashy flamingo. There simply was no fossil record to indicate its origins. Based on “points of distinction” ornithologists have associated the flamingo and grebe species with each other for many years. An offhand comment by Silbey in a letter is credited with bringing these two research groups together.

A “clade” is a group of animals which consists of an evolutionary parent and all of its descendants. Based on genetic studies a clade of birds named Metaves has been characterized that includes flamingo, grebes, hoatzin, pigeons, hummingbirds and sunbittern. The genetics clearly show a relationship, but do these completely different species have a common ancestor? Most scientists think so while others believe that they are examples of convergent evolution. “Regular” evolution begins with a single ancestor which differentiates into multiple levels. Convergent evolution turns this model on its head. Completely different ancestors evolve animals that either look like each other or are biochemically similar. The theory is that certain body forms and molecular chemistry is so much more efficient at exploiting a specific biologic niche that they will naturally evolve similar forms. The American Horned lizard and Australian Thorny Devil are excellent examples of convergent evolution. Read this blog post by clicking here.

But back to those strange feet which are a cross between independent toes and webbed. For some reason I had missed lobed feet when thumbing through bird guides, so this Pied-billed Grebe was a surprise to me. Back to the bird guides, I discover that rail and coot also have lobed feet. The lobes are stiffened and fold back when the foot comes forward in the water and flares during the stroke providing very hydrodynamic propulsion. The grebe is so comfortable in the water that it prefers to dive to escape predators. The grebe is a small, compact and short necked. Like other diving birds, the grebe sits low in the water. They feed on aquatic invertebrates, small fish and amphibians. Some birds like the chicken, eat small stones and grit as an aid to digestion. The grebe eats its own feathers, it is thought the feathers provide protection against the small sharp bones of their prey animals.

The wings are small with respect to the body and while it can fly, it doesn’t without good reason. They require a large “runway” of open water to run up their speed before taking flight. Grebes range from northern Canada to the northern coast of South America, a second population resides in the southern South America and a third in the Caribbean. Populations in colder regions where ponds and marshes freeze migrate to warmer wintering grounds.  Most grebes in Texas are permanent residents, most of the migrating grebes continue to Mexico, Central American and the northern coast of South America.

Birds have many ways to telegraph that they are of breeding age and of superior stock, some with flashy breeding plumage or changes in the fleshy cere on the top of the bill. The Pied-billed Grebe develops a wide black band on its bill. The band fades after breeding season. The beak isn’t what you would expect for a water bird; it reminds one of a chicken’s.

Looks can be deceiving, the plain water bird that I thought would be a boring write-up turned out to be one of the more interesting research projects I’ve tackled in recent years. I hope you found them as fascinating as I did.