Is your Woodpecker’s Head Red?

Is your Woodpecker’s Head Red? 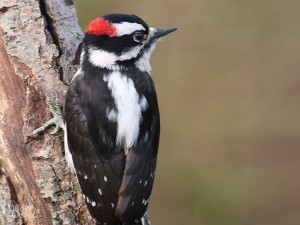 An interesting fact from the Cornell Lab of Ornithology,  “Male and female Downy Woodpeckers divide up where they look for food in winter. Males feed more on small branches and weed stems, and females feed on larger branches and trunks. Males keep females from foraging in the more productive spots. When researchers have removed males from a woodlot, females have responded by feeding along smaller branches”. 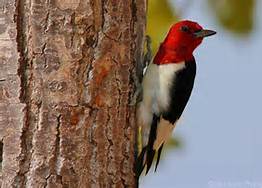 The Red-headed Woodpecker is a stunning bird that is primarily black and sports a magnificent solid red head and neck. While it is a year-round resident of the Gulf Coast, it is relatively rare in backyard gardens.

The Red-bellied Woodpecker has a red crown and nape, but the eyes, cheeks and throat are the same off-white as the belly. The back is covered in  a pattern of black and white called “ladder-back”.  Red-bellied woodpeckers can often be seen doing crazy contortions trying to snag a peanut or seed from feeders built for perching birds. 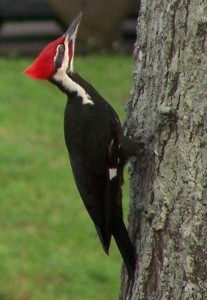 Woodpeckers physically look similar and possess many of the same adaptations necessary for pounding your head against the trunk of a tree (learn more about these adaptations in an article about Pileated Woodpeckers http://wildlifecenteroftexas.org/2011/05/pileated-woodpecker-new-video/ ). The American woodpecker family includes over a dozen woodpeckers (many have very localized habitats) and a handful each of flickers and sapsuckers. The primary differentiation into the sub-groups is the feeding behavior.

In general, Woodpeckers feed primarily on insects found on or in trees. But they are not above snagging a peanut left for the squirrels. The smaller species like the Downy and Hairy Woodpeckers forage along branches and tall weeds. A great deal can be learned from examining the bill. Woodpeckers that excavate large cavities for nests or food will have substantial bills that resemble the jackhammers that they are. The smaller species that graze insects from along the bark of trees or the galls where insects have laid eggs have much more delicate bills. Woodpeckers that specialize in crevices have very long tongues that have bristles concentrated at the tip. 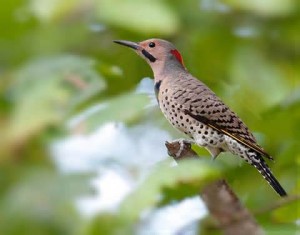 Flickers also feed primarily on insects, but they can often be found near or on the ground because they specialize in ants and beetles. They have delicate bills that reflect their feeding habits. Unlike other woodpeckers, the flicker is most often seen perching like other birds instead on hanging on the side of a tree or limb balanced against their tail. In the greater Gulf Coast, they are year-round residents, but along the Texas coast, they are more often seen in the winter. 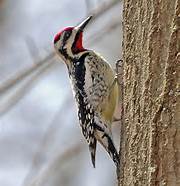 Sapsuckers (what a funny name!) are really what the name implies. They drill dozens of small holes that allow the tree’s sap to ooze. They feed on this sap and on the insects that are attracted to it. The bill of a sapsucker isn’t as long as a woodpecker’s, but instead looks like a bottlebrush. Capillary action sucks the sap into the bristles for consumption. Sapsuckers are usually very methodical about drilling their holes and the characteristic ringed pattern is easy to spot. Sapsuckers are only seen in the greater Gulf Coast area during the winter months.

If you wish these birds to visit your backyard, woodpeckers, flickers and sapsuckers enjoy berries and can be lured with seed mixes that include peanuts, peanut butter and seed mix/peanut butter mixture smeared into a hanging pine cone or suet holder. They also enjoy various kinds of suet.

This is a juvenile Red-headed Woodpecker that came to the Wildlife Center as a hatchling and now is old enough for release. A couple of things to note, the head is beginning to turn to its characteristic red and each tail feather ends in a point instead of  rounded like other birds. The “spikes” at the end of each tail feather are a continuation of the feather shaft itself. This tail adaptation is very important to how the woodpecker balances itself when clinging to the side of a tree and for leverage while hammering.