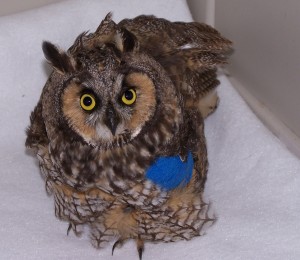 The Long-eared Owl (Asio otus) (previously known as: Strix otus) is a species of owl which breeds in Europe, Asia, and North America. Texas lies firmly in its non-breeding or wintering grounds, but sightings are rare. In the twenty plus years that the rehabilitators of the Wildlife Center have been caring for raptors, they have only cared for two or three. Reminiscent of a Great Horned Owl, the Long-eared Owl is much smaller and is considered a medium sized owl.

This species is a part of the larger grouping of owls known as typical owls, family Strigidae, which contains most species of owl. Barn Owls form the other family of owls called Tytonidae.

In parts of its range, the Long-eared Owl is considered a species at risk, or at some level of being endangered. Habitat destruction is the primary explanation for the decline of this raptor. Boreal forests are being cut down for development, land use is changing from timber to agriculture and tree farms are shifting from soft woods like pine to hard woods. Tree farm management has even impacted the Long-eared Owl’s habitat by thinning the underbrush and undesired trees.

The Long-eared Owl nests usually in coniferous forests, but needs nearby open areas to supplement hunting. Courtship begins in the winter with extensive calls, aerial displays, mutual grooming and feeding.  The pair will utilize the left over nests of other large birds like crows or other hawks as a basis on which they improve.  The practice leads to big messy nests. The female will lay up to seven eggs and incubate them for twenty-five to thirty days. The parents will care for the offspring for another two months.

In addition to the courting displays, the female uses many interesting behaviors to lure predators away from the nest. First she spreads her wings and fluffs up all of her feathers making her look two to three times larger, lowers her head and makes aggressive noises. If that doesn’t work, she will fall to the ground and feign injury or pretend she in mantling a kill to lure the predator in close enough so she can attack.