Several months ago during the devastating fires in Montgomery County one of our very dedicated volunteers received a call from a lady whose property and home had burned.  In the midst of all the havoc she had found a baby squirrel with a burned tail. 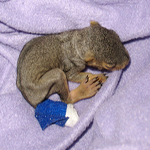 Our volunteer, Sue, met the lady at night and took the precious little female fox squirrel that smelled of smoke and was covered in soot.  Veterinarian exam showed the tail would eventually slough off and it was started on antibiotics and the tail was wrapped.  The little squirrel thrived under the watchful eye of Sue.   When it was weaned the squirrel was put in a cage with another squirrel that had come to the wildlife center as an orphan.  It was a happy day when they were released.  (see more photos at the end of this article)

Both squirrels are doing fine and are seen frolicking around their release area.  They are given back-up food and have plenty of water and shelter.  It is important to remember that because of the fires and the drought our wildlife creatures benefit from the back up food and water homeowners can provide.

The Wildlife Center of Texas is very fortunate to have many devoted volunteers like Sue who go above and beyond to help the 9,000 animals that have come through the wildlife center doors this year.