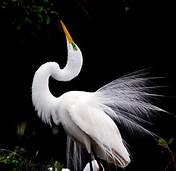 Raptors top the list of the most self-possessed and regal birds, but egrets and herons are a close second. The new year was only a few days old when a Great Egret (Ardea alba) came to the Wildlife Center for care. Dozens of time a year the Wildlife Center receives water birds that are at best entangled in monofilament or at worst deeply hooked by large treble hooks AND entrapped in fishing line.  When humans fish, they use monofilament, hooks, lures and sinkers, wouldn’t it be wonderful if someone could design a system as simple yet sophisticated as used by birds. Fishermen leave miles of monofilament cut free from tangles and snags in the environment per year. This fishing line doesn’t pose much of a hazard to humans, but for the animals that live in the waters it can be a slow and brutal death sentence. Remind the fishermen in your life that they are trespassing into the home of animals that live in that habitat. The adage “Leave only footprints” reminds one to leave nothing man made behind when enjoying the natural beauty – this applies double or triple to monofilament and other fishing gear and trash. 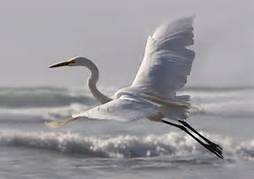 Volunteers and staff removed monofilament line and fishing hooks that ensnared the recently rescued Great Egret. The snarl prevented the bird from effectively fishing. Luckily it was still strong enough to feed without human intervention and quickly regained its strength. Once recovered, the Great Egret was placed in a large flight cage to strengthen flight muscles in preparation for release.

Several birds look close enough to the Great Egret to confuse identification. The Great Egret is a large white egret that sports dark legs and a stout pointed bill. Similar looking birds include the Great White Heron, which is the white coloration of the Great Blue Heron. The Great White Heron has pale legs and a much heavier beak. The Snowy Egret is smaller and has a black bill and yellow feet. The Cattle Egret is a stockier bird that often has a pale wash of reddish color on the chest, back and/or head.