The Wildlife Center continues to receive wildlife that was displaced by the recent rains. Mom has moved her kits to the second most safe place she knows…but because of her natural perfume (skunks always smell a little like…well, skunk) the humans and dogs know she’s moved in. This rarely ends well for either party.

An interesting fact – it is actually difficult to get a skunk to spray. They hoard their chemical weapon since they only have four or five sprays at a time and it takes ten days to make more. The big caveat is “unless they are startled”. Skunks are very nearsighted (and a little cross-eyed in appearance) and you have to be dangerously close for them to see you. Given the opportunity to flee they will, however there isn’t a self-respecting dog that won’t make a wild dash to see what smells so “wonderful”. Dogs don’t seem to learn their lesson either. Other wild animals give it wide berth.

Skunks have a whole ritual to warn off before spraying. There’s no biologic reason for it, but if an animal goes the other way without the skunk having to spray, they get to save ammunition for later. First they arch the back, then begin pounding the front feet – at this point you should be making tracks because next they flip the business end towards you and cut loose. Some will bounce the backend up for better aim, while others actually do a brief handstand.
The only known predator of the skunk is the Great Horned Owl. Considering how many Great Horned Owl babies come to the Wildlife Center smelling like skunk, it must be a favorite meal. Skunks are nearsighted and can’t really see much past ten to fifteen feet, so they are extremely vulnerable to being hit by cars. People can pose a real threat to them because they aren’t as well tolerated as raccoon and opossum.
The skunk, in my humble opinion is the most beautiful and interesting wild animal to rehabilitate, Raccoon babies are just plain cute and they 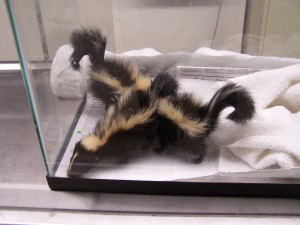 are my first love, but the cross-eyed, pidgin -toed skunk has the most exquisitely thick and lustrous coat. They aren’t the sharpest knife in the drawer, but thanks to their defense mechanism, they don’t have to be. Like the raccoon, the idiosyncratic behaviors emerge shortly after the eyes open. While young enough to still be nursing, the babies will stomp their front feet, flip their south end to you and flip their tail over their back and assume “the position”. They aren’t really spraying at this age, but you don’t want to be in a closed room with them too long either. Like raccoons, skunks must be rehabilitated off-site. The Wildlife Center accepts ALL injured, sick or orphaned Texas native wild animals, however some animals like raccoon, skunk, bat and deer must be rehabilitated at the homes of state and federally permitted rehabilitators.

Thanks in part to Pepe Le Pew, when asked to describe a skunk most people will mention “the bomb” and “the stripe”. While they all have “the bomb”, some have a single white stripe, others have two white stripes and still others have broken stripes and spots. The black and white color scheme isn’t a given either. Skunks can range to brown or gray to cream. Around here, this is unusual though. Skunks are born with their stripe, unlike raccoon who can be born with only a hint of mask and ringed tail.

Thought by many to be nocturnal, they are actually crepuscular (most active at dawn and dusk). However, if they feel safe, they will boldly venture out during the day also. Like raccoon and opossum they will eat almost anything that doesn’t eat them first. They have an interesting taste for honey bees – not the honey, the bees themselves. Adults have been seen teaching their young to scratch on the hive just enough to get the bees stirred up and then eat the bees as they emerge. Adults are the size of a small house cat – with really short legs. Once mature, the skunk’s life is largely solitary. In bitterly cold weather, they may den together for mutual warmth. Females and that year’s litter will den in one and the males in another. Like raccoons, babies remain near mom until the spring when she goes into season again. The lifespan of a skunk isn’t very long, like the opossum it is usually only three or four years. In captivity they can live eight to ten years.

Skunks are terrestrial in nature and use their long front claws to excavate dens and dig up juicy grubs for dinner. They will also den dark tight places, like under the porch or garden shed or behind bales of hay. If you find one living in an inconvenient location, the same techniques used to get raccoons to move out of attics will work for skunks. See the articles under the “Need Help?” tab for ideas.

There are many recipes for the removal of skunk spray, but most don’t work, despite what your grandmother says. Only one recipe for skunk odor removal has been “confirmed” by Mythbusters (a chemist published it in 1993). Mix and use immediately, it will not keep. In fact, if stored in a tightly sealed container it could explode.

one quart of 3% hydrogen peroxide

one quarter cup of baking soda

one teaspoon of liquid hand soap (not detergent)

Saturate affected area and work it well into the fabric/coat/skin. Rinse with warm water and repeat as necessary.

Charley Harper is my favorite wildlife artist, considered a “modern minimalist” he captured the essence and humor of his subjects with simple geometric shapes. Each artwork has a paragraph or two about what inspired the image. Often the image showed the conflict between two species – the Mockingbird plucking hair from a cat that got too close to the nest or the squirrel raiding the birdfeeder. With respect to the skunk he wrote “Skunks have THE BOMB. Long ago they won the animal arms race glands down. Now they walk among us in peace, using their terrible weapon only as a deterrent.” Hiding in the woodpile, eyes shining in the night are the raccoons who are respectfully waiting for the skunk eat its fill. There isn’t much that can get between a raccoon and dinner…but the skunk is one.