The Wildlife Center of Texas received a call from a concerned citizen about a young opossum who had fallen from a tree and was impaled on branches.

The Houston SPCA rescue driver arrived on the scene and gently cut the branches away and immediately brought the injured opossum to the Wildlife Center of Texas.  The opossum had fly eggs on the wound (these are the yellow specs in the picture, and they were removed to prevent maggots from occurring). 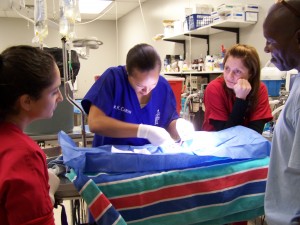 Veterinarian and vet technicians rushed the opossum into surgery and the stick was removed.  Luck was with the little one because no major organs were affected.  A shunt was put in and the opossum is on antibiotics and pain medications. 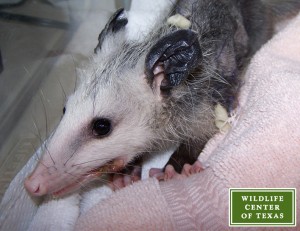 A HUGE thank you goes to our affiliate the Houston SPCA who provided the rescue driver and veterinarian for saving this little one’s life.