Raccoon – Too Smart by Half

Raccoon – Too Smart by Half

Raccoons are my problem children. They are just “too” – too cute, too curious, too brave, too strong, too aggressive, too smart, too adaptable, too devious, too agile … well, you get the picture. As my Dad would say they are “too smart by half”. The problem is that God gave them too much dexterity to go with their superior brainpower and insatiable curiosity. 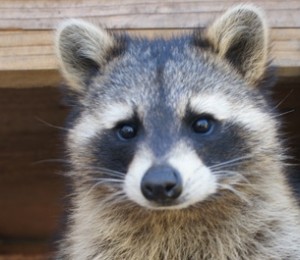 Northern or Common Raccoons are classified taxonomically as Procyon Lotor (family/genus). Procyon translates from Latin as “before the dog” or “the lesser dog” and refers to the evolutionary history of the animal. Originally, it was thought that the raccoon was distantly related to dogs and bears, but recent evidence suggest they may be more closely related to the red panda.  Lotor translates from Latin as “washer” or “he who washes”. The word “raccoon” is derived from the Algonquian word aroughcoune, “he who scratches with his hands.”

Raccoons are not strictly nocturnal. They are easily intrigued and will investigate new or interesting activities. This is especially true of babies that are old enough to get into trouble, but not old enough to be on their own. Raccoons will shift feeding patterns to when food is available frequently appearing during the day to exploit aquatic food exposed during low tides or cat food that’s only set out in the morning. Therefore, daytime sightings of otherwise healthy looking raccoons is not cause for alarm. 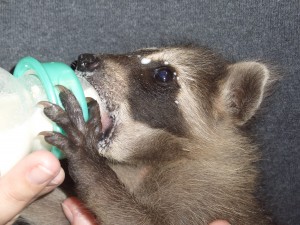 At 5 to 6 weeks, the kits will belly crawl to explore near the den and call for mom if hungry or anxious. By 10 to 12 weeks, the kits are following mom out to forage and making lots of noise romping and stomping. Raccoons stay with their mothers for almost a year. They will venture out on their own for short periods of time, but always return to “touch base”. Kits hate to be separated and almost always explore in twos or threes.

Raccoons are the ultimate “single mothers”, not only do the males not contribute to rearing young; they are actively driven away from den sites and food sources. If food is plentiful, mom may allow sisters or daughters to remain nearby or share a den. The males however, are encouraged to strike out on their own. Forcing male offspring to leave the maternal territory fosters genetic diversity.

Raccoons along the Gulf Coast usually weigh between 11 and 20 pounds and while they look cute and cuddly, they are formidable predators. The grizzled gray, black, tan, cream and brown coat is extremely effective camouflage. The iconoclastic mask and rings should make the raccoon easily spotted, but nothing could be further from the truth. Spotted at light’s edge, raccoons have an almost magical talent, vanishing like a puff of smoke. Even during the daytime, unless they want you to see them, you usually won’t. The eyes are highly reflective (indicates excellent night vision) and are easily spotted by flashlights, but an annoyed raccoon will simply close his eyes or lay his head against the trunk looking up. 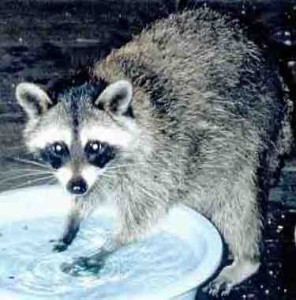 Raccoons have a highly developed sense of touch that is considered to be superior to other mammals with the possible exception of primates. They rely almost exclusively on their sense of touch when hunting in shallow water. The paw pads are as supple and velvety as a newborn human’s. The texture of the pads changes slightly when wet, so it is believed that tactile sensors must change or activate when wet. The pads don’t toughen up with age or use, like those of a dog or cat, instead they remain soft, warm and silky. “Curb feelers” –  stiff short hairs on each side of the claws further accentuates the raccoon’s ability to fish blind.

The idiosyncratic behavior of constantly needing to manually manipulate everything in their environment seems to be deeply instinctual and hardwired. Orphaned babies spontaneously begin exhibiting the behavior as soon as they have enough coordination. New objects must be manipulated, dropped into the metal dish, manipulated, dropped into the plastic water dish, dunked in water, chased underwater, scooped out – then manipulated some more. Every crack and crevice must be probed.  Multiple “behavioral enrichment toys” must be introduced at the same time to prevent stealing and squabbling.

Originally an aquatic predator, the raccoon still prefers creeks, lakes and wetlands, but has proven itself to be supremely adaptable to urban life. Raccoons adore water, but prefer shallows. They are strong swimmers and can easily cross rivers and lakes, but usually venture into deep water only as an escape route from trouble. Omnivorous and opportunistic, raccoons will eat virtually anything that doesn’t eat them first.

Suburban raccoons show amazing adaptations in behavior and diet. They can become quite habituated and bold, looking into windows and disassembling anything that piques their interest. In neighborhoods with storm drains that are connected to rain detention ponds, raccoons are frequently seen using them for a fast get away, safe conduits to the rest of the neighborhood and if the pond doesn’t run dry, the dinner buffet.

Despite mutual curiosity, interaction between raccoons and humans should be minimized. When cornered or injured, they can be extremely aggressive and are physically capable of inflicting great harm. In addition, they can harbor several diseases and parasites that can be transmitted to humans and our pets. While raccoons are considered “high risk” for rabies, the incidence is low. Of greater threat is an internal parasite, Baylisascaris procyonis, a roundworm which causes potentially fatal encephalitis. As with other internal parasites, the eggs are found in feces or on contaminated surfaces which are inadvertently ingested. 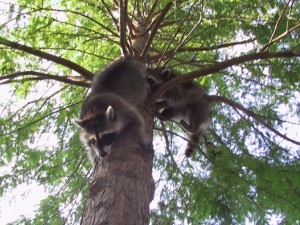 Raccoons are excellent climbers and are one of the few mammals that can descend vertical tree trunks head first. Like the squirrel, their ankles and hips allow 180 degree rotation. They are escape artists who can get into or out of just about anywhere. They have the dexterity to remove nuts from bolts, open latches and water faucets. They have the strength and determination to drag a metal trash can containing 25 pounds of dog food across the yard. The claws make efficient crowbars, but are capable of the most delicate of manipulations.

Mom’s word is law. Kits are so well behaved, it is humbling.  While transferring a wild mom and her babies from one cage to another, we watched as she took her time, carefully inspecting the new home. The babies stayed behind after being “humphed at” to stay put. They vibrated with excitement, but didn’t try to follow. Once she was satisfied, she trilled and the babies came running and tumbling over each other in their haste to get to her.

We have also witnessed what happens to wayward kits. A mom and her kits were “cleaning up” spilled food beneath the cages housing rehab raccoons. Startled by a dog, she signaled “follow me”, three kits fell into line while the fourth climbed a small tree. The baby gave the dog the coonie equivalent of a raspberry. Mom swarmed up the tree, knocked the insolent teen to the ground, then scolded him all the way back.

Luring wildlife with food is strongly discouraged. As a wildlife rehabilitator who specializes in raccoons, I understand the deep desire to see these animals up close. However, a single sick raccoon can spread disease to dozens of others. This mechanism explains the regional rise and fall of distemper. Distemper is a horrible disease that is almost always fatal and in the later stages can mimic the neurologic symptoms of rabies.