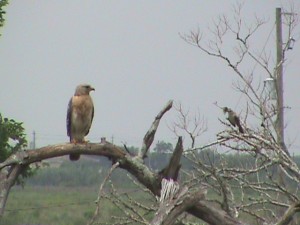 Recent rains and high winds caused young red-shouldered hawks to fall from their nests before they were ready to fledge.  The Wildlife Center of Texas is highly equipped to care for these young raptors, but is happiest when the youngster’s parents are able to continue the care.  These hawks tend to pick the tallest pine or oak tree to build their nest.  Many homeowners express their disappointment when finding the young ones on the ground because they have watched the courtship, nest building, and early activity of the nest, only to find the young ones in peril on the ground.

Wildlife Center of Texas staff was consulted on two such cases.  One homeowner in San Leon called when three baby hawks were found on the ground.  WCT staff member told the homeowner exactly what to do.  A makeshift nest was made out of a laundry basket and attached to the tree.  Two of the three babies were put in the basket.  The third baby was injured when it fell and was brought to the Wildlife Center.  Radio graphs revealed a hair line fracture that will heal with time.  The San Leon homeowner reported that the two remaining hawks are being cared for by their parents.  They also are under the watchful eye of the homeowner.  Daily updates and these pictures were sent to the Wildlife Center.

Another homeowner in Santé Fe reported the same problem.  They too, constructed a makeshift nest and used a vegetable bin.  The parents are tending to the babies and all is well.

WCT staff thanks these two homeowners for going above and beyond to help these wild babies remain wild and free.