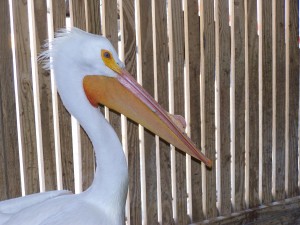 Enough cannot be said about the danger that mono-filament fishing line, hooks and lures pose to wildlife. Animals come to the Wildlife Center of Texas tangled, hooked and injured so frequently we have a trophy board for all of the hooks and lures that have been successfully removed. This White Pelican was rescued from an island. It was ensnared in fishing line and hooks and found to have numerous injuries. Daily hydrotherapy is helping to heal a badly injured foot.

The upper Gulf Coast is home to two very different species of pelican, the White Pelican (Pelecanus erythrorhynchos) is a winter visitor while the Brown Pelican (Pelecanus occidrntalis) is a year round resident. In some ways, the two species are more different than they are alike. The most obvious difference is the size and coloration. The White Pelican can weigh up to twenty pounds while the Brown is usually ten to twelve.

Both species are gregarious and the whites nest in especially large colonies. If you see one pelican loafing on the pier or floating on the water, there will almost always be several more nearby. The brown is marine, but is rarely seen far offshore, even when migrating. The white is almost exclusively an inland bird that prefers freshwater. 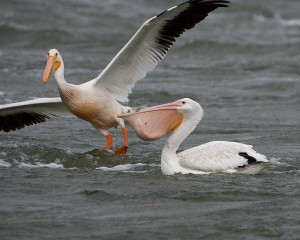 When asked how the pelican hunts, the almost universal answer will be that they dive from great heights head first into the water to emerge with a pouch full of fish. Of the seven species of pelican ONLY the BROWN PELICAN fishes in this fashion. They can dive from fifty feet and survive by entering in a streamlined fashion. The entire breast provides shock protection for the rest of the body. To the touch, the chest feels and crinkles like bubble wrap. The white often fishes cooperatively by herding fish into shallow water where they are more easily scooped into the gular pouch.

Both species undergo elaborate molting which usually takes three years to complete. But that’s not the end to the molting. They both exhibit extensive breeding plumage. The White Pelican is primarily white with black primaries and outer secondaries. These black feathers rarely show as the pelican, despite its weight rides high in the water. 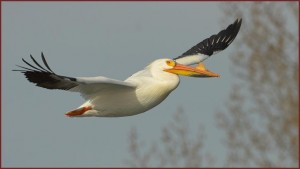 The bare skin around the face, bill and gular pouch are usually an orange-yellow that deepens to orange-pink during breeding season. The short stout legs and heavily webbed feet are usually yellow which deepens to orange during breeding season. Early in the season, the White Pelican exhibits a beautiful crest of yellow feathers and additional yellow feathers on the chest. One more interesting change occurs to the breeding males to signal what a fine specimen he is – he grows a fibrous knob about two-thirds down the top his beak. This knob can be as tall as two inches. Once eggs have been laid, the parents sprout fine dusky gray feathers about the crown to indicate that they are incubating or feeding chicks.

It probably isn’t fair to compare disposition of the brown and white pelican in the wild, but in captivity the white is much more aggressive. During rehabilitation and treatment, the brown is relatively docile and easy to handle. The edge of the beak is sharp and the tip is hooked, but while care must be taken to prevent damage to the human, the pelican’s beak is also surprisingly fragile and great care must be exercised. Protecting the beak and securing it so that the handler isn’t injured can be tricky with the white since it will aggressively lash out once its “personal space” has been invaded. Extensive experience by our Oiled Wildlife Response Team members makes handling these huge birds look easy.