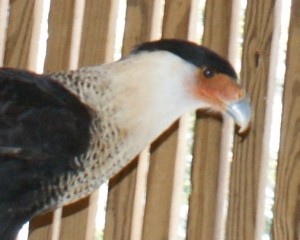 The Northern Crested Caracara is of the family Falconidae, subspecies Polyborinae or Caracarinae depending on the source. In Latin it is known as Polyborus (eats almost anything) plancus (eagle). But it is also known as the Caracara Cheriway, Audubon’s Caracara or the Mexican Eagle. Five genera are recognized and most are listed as threatened.

Classified as a falcon, the Caracara is quite an unusual bird. A beautiful bird in a palette of black, white and a yellow that blends to orange or red, it seems to straddle the families of falcon, vulture and well…chicken.

Once identified, it is impossible to mistake the Caracara’s striking silhouette, either at rest or in flight. At rest, the Caracara is obviously a powerful raptor; very long of leg, powerful talons, a distinctive beak and bushy crest. In flight; the long neck and tail in combination with the broad wings give it the appearance of a “flying cross”.

Considered a medium sized raptor, the Caracara in 19 to 23 inches in length and weighs 1 ¾ to 3 ½ pounds. The wingspan is approximately 48 inches. On average they are heavier than a Red Shouldered Hawk, but slightly smaller than Red Tailed Hawk.

At maturity, the cere (a fleshy area along the top of the beak) is usually red or dark orange. When excited this area takes on a distinctively yellow coloration.  The cere also give indication of the bird’s maturity and sexual readiness.

The Caracara is a slow hunting raptor that prefers an easy meal of fresh carrion, but is just as satisfied with large insects, reptiles, amphibians, fish, birds and mammals. It is often seen walking along the ground or wading in shallow water looking for prey. Believed to have the most varied diet of any raptor, the Caracara require vast hunting grounds.

Texas and Florida represent the northern most limit of the Caracara’s habitat. The species is better represented in Central and South America. The Caracara prefer open lowland country such as pastures, prairies, savannas, river edges, ranches and some forest and marshes. The conversion of habitat to agricultural, residential and commercial uses causes proportionally more damage to this slow reproducing bird. The Caracara is one of the few species to have benefited by the conversion of land by ranching.

The Caracara is one of the least understood raptors and while it is known that viability is dropping at a rate greater than its habitat destruction, scientists haven’t been able to determine specific factors. It is known that Caracara do not migrate and are very territorial. Once established, the Caracara tend to remain in place as long as the environment will support them.

Unlike other falcons who rehabilitate abandoned nests, the Caracara build big messy nests in Live Oak, palm trees or woody scrub. The monogamous pair will incubate a pair of white eggs that have spots and blotches of brown. Chicks are yellowish buff with crazy flyaway patches of dark brown feathers on the head.

The young fledge at about 8 weeks of age, but stay close to the parents for 6 months or longer. Young are encouraged to leave the parent’s territory prior to the next breeding season. Females roam three to four times as far from their parent’s territory as do the males. It is believed that this prevents inbreeding.

Adult plumage isn’t attained until the third year. Sexual maturity doesn’t occur until the third or fourth year. In the meantime, the juveniles sometimes congregate in large groups of up to 100 individuals to play, mock fight and find a suitable mate.

Even people that live in Caracara territory often never see one because they haunt places usually only frequented by ranchers and hikers.