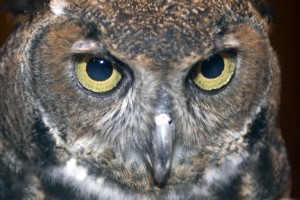 The Great Horned Owl (Bubo virginianus) is arguably one of the most majestic of all raptors. Solitary in nature, a group would be called a Parliament. Of the order Strigifermes and family Strigidae, the Great Horned owl is considered a “true owl”. The other owl family, Tytonidae include barn owls. Eight sub-species have been recognized. The territories of sub-species rarely overlap.

The largest owl in the United States, it can stand 18 to 27 inches and have a wingspan of 48 to 60 inches! The Great Horned owl is the most widely distributed true owl in the Americas, inhabiting all ecosystems except deep desert and Arctic tundra. The overall coloration ranges from near white in the far northern portion of their range to dark chocolate brown in the southern regions.

Size and weight varies geographically with the larger, heavier individuals living in colder climates. The females are larger than the males and weight ranges between two and a half and four pounds. All sub-species share the overall markings: prominent ear-tufts or “horns”, white patch at the throat, narrow bars on the front and a random mottled back.

The Great Horned Owl primarily hunts at night, but sightings at dawn and dusk are not unusual. Perched high above an open area, it silently swoops down upon almost anything that moves. Its diet is extremely diverse, but small to medium mammals, birds and waterfowl are favorites. It is the only known predator of the skunk.

Unlike many raptors, the Great Horned Owl will walk on the ground to gather crawfish, amphibians, reptiles or large insects. It have been known to walk into henhouses and wade into shallow water for a meal. Owls swallow small prey whole or take larger prey to a safe perch.

It is estimated that the Great Horned Owl can lift prey up to twice its weight. Non-digestible portions of dinner such as feathers, hair and bone are compacted by the stomach into a tight pellet which is regurgitated. These pellets yield a fascinating glimpse into the diet of the Great Horned Owl.

The most dramatic feature of the Great Horned Owl’s feet are the talons; needle sharp points pierce prey easily. But several adaptations allow for more efficient hunting. The underside of the owl’s foot is rough and knobby which provides superior grasping. The bones of the foot are much stronger than other birds to survive the impact with prey. Without conscious thought, the talons continue to ratchet closed until the owl decides to open them. Massive thigh muscles give the talons their strength.

Adaptations in eyesight and hearing make the Great Horned Owl a formidable predator. At a glance, the bright golden yellow eyes mesmerize the observer. Contrary to popular lore, the nocturnal Great Horned Owl has equally excellent vision during the day and the dead of night. The eyes are not spherical like mammals, but instead are oblong and fixed in bony orbs. To compensate, the neck has fourteen neck vertebrae allowing for 270 degrees of rotation.

Great  Horned Owls have three eyelids. The top eyelid “blinks”, owls frequently blink eyes independently of each other, appearing to wink at the observer. The lower eyelid raises to meet the closed upper lid for sleeping. A third eyelid, a translucent nictitating eyelid functions as a “windshield  wiper” that slides across the eye at a 45 degree angle.

The Great Horned Owl’s extraordinary hearing depends on many adaptations, including a  much larger and more complex area of the brain that processes hearing located in the medulla. The asymmetric placement of ears allows the Great Horned Owl to triangulate the source of a sound without tilting or twisting the head. Facial disks and “ear” tufts can be shaped much like a radar dish to channel sounds even more effectively.

The feathers of the Great Horned Owl are uniquely designed to limit the noise of flight. Compared to other birds, owls have few down feathers, instead the contour feathers have downy barbules and the leading edge has flutings or fimbriare. The wings are relatively large and rounded which allows for slow silent flight. The Great Horned Owl is a perfectly designed stealth hunter. Even the legs and feet are covered in feathers! These tiny feathers provide warmth and act as tactile sensors.

The courtship between owls begin in October and is marked by greatly increased vocalizations as single owls try to locate mates. By December, the mated pairs will begin singing duets. The female may be physically larger, but the male’s voice is much lower. Pairs are monogamous and remain in their territory year round. This territory is aggressively protected while the pair is raising chicks.

Pairs often start with an abandoned raven or squirrel nest and proceed to improve it. Tree hollows are sometimes selected. Either way, mating occurs in the early spring, resulting in a usual clutch of two eggs. Incubation is 30 – 37 days and the hatchlings will be brooded continuously for two weeks. 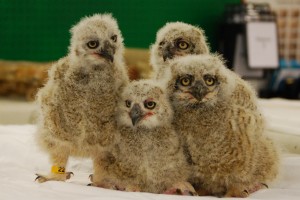 Hatchlings are bright white puffballs that slowly gain their distinctive plumage.  Nestlings move from the nest to nearby branches at about six weeks and fledge a week or two later.

Great Horned owlets are one of the first animals that arrive at the Wildlife Center each spring. Great Horned Owls nest much earlier than other birds because survival of their offspring hinge on the babies being old enough to hunt at the peak of summer.

This year saw a dramatic increase in the numbers of Great Horned owlets finding their way to us for care. It is believed that the Ike ravaged squirrel and crow nests did not provide a sufficient base for the Great Horned owls to embellish.