Sharon Schmalz is executive director of the Wildlife Center of Texas in Houston, Texas. The Wildlife Center cares for approximately 10,000 wild animals each year and educates over 50,000 adults and children about wildlife, conservation and the environment.

The Wildlife Center works closely with the Texas A&M University School of Veterinary Medicine professors and students. Ms. Schmalz is the representative for the Wildlife Center of Texas on the advisory council for the Texas State Animal Resource Team (TXSART), a program of the Texas Veterinary Medical Foundation that coordinates preparedness, response and recovery efforts for animals affected by disasters in the state of Texas.

For 32 years, Ms. Schmalz has maintained the multiple state and federal permits necessary to care for injured, orphaned, endangered, educational and oiled wildlife. A founding member of the Wildlife Center of Texas Oiled Wildlife Response Team, she has acted as the director for 25 years. The team responds to oiled wildlife in both inland and coastal areas of the Gulf Coast.

Ms. Schmalz is 40 hr. HAZWOPER (Hazardous Waste Operations and Emergency Response) certified and ICS (Incident Command System) trained to care for oil-contaminated wildlife. She maintains a TWIC (Transportation Worker Identification Card) card to allow for the collection of oiled wildlife in locations sensitive to Homeland Security such as ship channels and ports.

She was involved in the development of the “Best Practices for Migratory Bird Care During Oil Spill Response” document in Anchorage, Alaska in 2001. For 11 years, Ms. Schmalz has coordinated oiled wildlife response workshops for the Texas General Land Office and for industry and maintained the resulting database of potential volunteers for response. 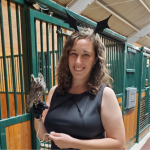 After graduating with University Honors from New Mexico State University, where she received a Bachelor’s in Music Education, Brooke realized another lifelong passion of working with animals.  After two years as a band director, she left the teaching field in 2013 to complete a wildlife rehabilitation internship at Wolf Hollow Wildlife Rehabilitation Center in Friday Harbor, WA.  Brooke moved to Houston from New Mexico in January of 2014 and briefly worked with the Houston SPCA’s Adoptions team before joining the Wildlife Center of Texas.

Since joining WCT, Brooke has focused on customer service and administrative tasks alongside animal care.  She now manages daily operations, including keeping supplies stocked and compiling the endless records needed to keep our permits valid.  When not at the center, Brooke keeps her musical talents sharp by participating in a community band and show choir and enjoys time with her partner and their two cats.

Kara is originally from Tyler, Texas but for the last twelve years has traveled around the United States caring for all different species of animals including large carnivores, marine mammals and her favorite, birds of prey. After graduating from Moorpark College’s Exotic Animal Training and Management Program in 2012, Kara has followed her career to Florida, California, Arizona, Washington and Alaska. It was in Alaska where she rehabilitated primarily bald eagles that she became fascinated with rehabilitation efforts and the joy she received when releasing them back to their native habitat. After working briefly in Washington State and obtaining her rehabilitation license by the Department of Fish and Wildlife, Kara decided it was time to move home to Texas to be closer to family. Kara is very excited to be the Wildlife Rehabilitation Manager at Wildlife Center of Texas because of the diverse amount of animals the center cares for each year. Kara is currently working on obtaining her falconry license and enjoys hiking & traveling to unique places anytime she can! 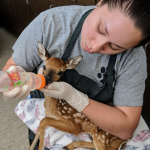 Being around animals has always made Jessica happy.  She jumped at the opportunity to work at the Houston SPCA starting in 2013 and loved helping people adopt their perfect new family member.  One spring day, the Wildlife Center of Texas put out a call to the SPCA staff for assistance feeding an overabundance of baby squirrels, and Jessica was the first to volunteer.  The wildlife center appreciated her help so much that they invited her back the next spring as a seasonal staff member.   Eventually, Jessica became an essential part of the team and was invited to stay at the center full-time in 2016.  She loves learning about all of the different animals that come through our doors and says she still learns something new every day!  When she’s not working, she enjoys hiking and snuggling with her two dogs and parrot.

Sharon began as a volunteer at the Wildlife Center of Texas in 2016 while studying as a dual credit student at San Jacinto Community College and quickly became fascinated with the rehabilitation process. The following summer she was able to return as a sponsored intern before graduating with her Associate of Science degree. Sharon continued her education at Stephen F. Austin State University, graduating as a University Scholar with a Bachelor of Science in Ecology and Evolutionary Biology. While pursuing her degree, she worked as an academic tutor and assisted graduate biology students with field work.

In 2019, Sharon joined our team as seasonal staff before shifting to full time in March of 2020. During the winter of 2019, she worked as a volunteer researcher with the Leatherback Trust assisting in monitoring a sea turtle nesting beach in Costa Rica. At the Wildlife Center of Texas, Sharon is currently involved in triage and general patient care, ambassador care and training, and protocol development. 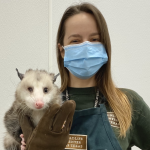 Shae started her animal caretaking journey in college, working as a Kennel Technician at a Huntsville, Texas boarding kennel from 2016 to 2019, while obtaining her Bachelor of Science in Animal Science from Sam Houston State University.  Before graduating, she completed a full-time internship at the Houston Zoo in their Natural Encounters department.  During her internship she got to work with various ambassadors and fell in love with native wildlife like the Red-Tailed Hawk and Texas tortoise.

Shortly after graduating university, Shae started her career at the Wildlife Center of Texas in April 2021. She has since cultivated a special appreciation for fox squirrels, shorebirds big and small, and our resident ambassador opossum. 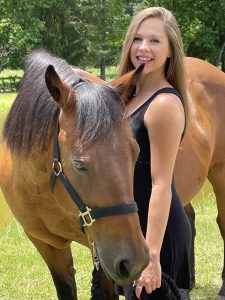 Jenna’s love for animals started at a young age, when she would hang out on the farm with her horses and take her dogs on all her adventures. Her wildlife journey started early as well, when Hurricane Ike blew down a baby squirrel from a nest in her yard. She immediately knew something had to be done to help the little guy. Jenna and her mother brought him straight into the Wildlife Center of Texas, and the moment she walked in it she knew it was where she belonged. 12 years later she enrolled in wildlife courses at the University of Houston, and at the age of 22 she graduated with a Bachelors in Wildlife Biology.  She applied and landed a job at WCT just two months later.

Jenna loves seeing and learning about all of the diverse wildlife that comes through our front door.  She is excited to come to work every day to help the animals grow and heal and to see them be able to return to the wild.  When she is not working, Jenna enjoys hiking and snuggling with her cat, Jasper. 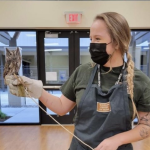 Prior to joining the Wildlife Center of Texas Team in September of 2021, Candace completed her Bachelors of Science with an ecology and conservation biology specialization. In school she studied abroad in Vlissingen, Netherlands for environment sustainability and completed undergraduate research in the university greenhouse.

After college, Candace volunteered with Nature’s Nursery Wildlife Rehabilitation Center in Whitehouse, Ohio and realized her passion for working with wildlife.  She applied and was accepted into an internship and eventually a staff position at Nature’s Nursery. While there, she was involved in patient triage, public education, and animal supportive care. After moving to Houston, she happily joined the Wildlife of Center team. Here, she devotes time to veterinary science and public education. When she’s not at the center, Candace is spending time with her partner, domestic bunnies, and cats.