The Wildlife Ambassadors at The Wildlife Center of Texas allows people to have an up-close and personal learning experience with native Texas wildlife. We are glad to have this very special tool to promote wildlife education and peaceful coexistence. It is illegal to keep any protected species of wildlife, but special education permits obtained by The Wildlife Center of Texas from the state and federal governing agencies allow us to use these animals as ambassadors for education purposes. Our ambassadors are all non-releasable animals that would be unable to survive in the wild, but are well-suited to life in captivity. They travel with our volunteers and staff for educational presentations, help to teach visitors to our center about the local wildlife, and educate guests at our annual Golf Tournament fundraiser about many aspects of wildlife. 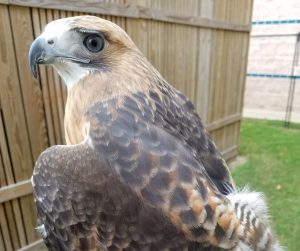 The Red-tailed Hawk came to The Wildlife Center of Texas in 2007 when he was about one year old. The hawk had been hit by a car and the left wing was fractured. Examination by our veterinarians revealed that the wing was too badly injured to be repaired, meaning that the hawk would never fly again.  Head trauma associated with the hawk’s incident has given him a very mellow temperament, which made him an excellent candidate for our ambassador program. While it is usually difficult to determine the gender of most hawks, blood work showed that our Red-tailed Hawk is a male. Today, visitors to The Wildlife Center of Texas are able to meet this magnificent raptor up close, and the Red-tailed Hawk plays a starring role in our on-site educational presentations. 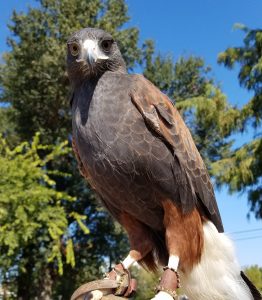 The Harris’s Hawk came to The Wildlife Center of Texas in 2011 as a juvenile. He fell out of his nest and suffered a break to his coracoid in the process. Unfortunately, when the hawk was brought to our center for help, the injury had already incorrectly healed and rendered the hawk unable to fly adequately to survive in the wild. However, because he was injured at such a young age, this hawk was very used to interaction with humans, and was an excellent candidate to become an ambassador. Harris’s Hawks are one of the only social raptor species, and in the wild these predators hunt together as a team. He is often taken on our off-site educational presentations, as busy places with a lot going on do not bother him. This species of hawk exhibits some sexual dimorphism, with females being about 35% larger. Based on weight, we know that our hawk is a male. 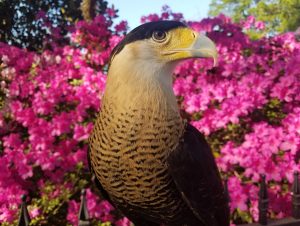 The ambassador Crested Caracara was hatched in the incubator here at the Wildlife Center of Texas in April of 2014.  An energy company received permission from the US Fish and Wildlife Service to remove the eggs from a nest that had been causing fires on their equipment.   As the young bird grew, it became apparent that there was a birth defect in its feet that made it difficult to perch and tear up prey.  For this reason, we decided to keep the young bird for use in our education program. Crested Caracaras are rapidly expanding their range northward from Mexico and are becoming a common sight in the Houston area.  They are in the falcon family, but they behave more similarly to a vulture.  They tend to eat a lot of carrion,  and spend a lot of time walking on the ground.  A blood test recently revealed that this bird is a male. 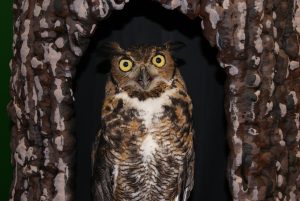 The ambassador Great Horned Owl was rescued from a roadside and brought to The Wildlife Center of Texas in 2009. The owl had been hit by a car, and he showed evident signs of severe head trauma. Birds with head trauma are usually unable to fly until they recover. Despite a course of anti-inflammatory medications, the head trauma did not improve. The Great Horned Owl was admitted into our ambassador program and is one of the three education animals that can be seen every day in our lobby. The owl is a big favorite at the Houston SPCA’s Critter Camp, where he demonstrates several interesting adaptations that are unique to owls.