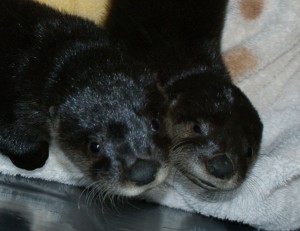 That is the universal reaction we get at the Wildlife Center when visitors to our facility or website discover that we are caring for three juvenile North American River Otters.  The next statement is invariably, “Why, I’ve never even seen an otter here!”  They are in good company.  Researchers specializing in otters can go years without seeing a wild otter in the flesh.  They have to conduct their research using scat, tracks and images caught on camera traps.  The rarity in sightings should not, however, be equated with a lack of individuals.

There are a number of reasons why otters are not often seen.  Even in healthy river environments, the abundance of otters is never high.  The best estimates of researchers, and estimates they are, put a natural population density at one individual to every 2 to 10 miles of river.  By their very nature, river otters are shy and elusive.  Also as river creatures, not much of them can be seen when they are in their favored habitat.  While in the water, only a small portion of their heads can be seen.  Trying to differentiate them from a beaver or nutria is very difficult.  River otters, as a rule, are active on land only at night and remain in the water or in a den during the day. 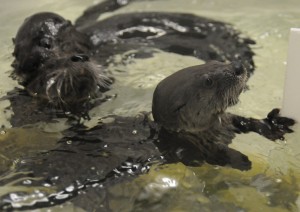 Otters belong to the weasel family, the Mustelidae.  Other members include ferrets, mink, badgers and wolverines.  These creatures are all noted for their boundless energy and voracious appetites.  Their body plans are equally similar:  long thin flexible bodies, a small head equipped with powerful jaws and short strong limbs.  Also in common to all of the species is a set of large musk glands not so dissimilar from their distant cousins, the skunks.  They use these for defense, for scent marking food caches and latrines, and as an attractor for mating.  Mustelids in North America range in size from the least weasel at around 3 ounces to the sea otter at 90 pounds.  Mink weigh in at about 2 pounds, badgers at 15-18 and wolverines at up to 32 pounds.  What is a bit surprising is that male river otters can reach that same weight, though the females are more typically weigh half of that.

Otters engage in play for fun, but play also serves to strengthen social bonds and to sharpen hunting techniques. River otters will eat just about any living creature they can catch.  Their diet is primarily fish and crayfish, but they will also feast on frogs, snakes, birds, and rodents.  Otters have a high metabolism which requires them to consume 15% – 20% of their bodyweight in food each day.  Understandably, when they are not feeding or playing, they are sleeping. 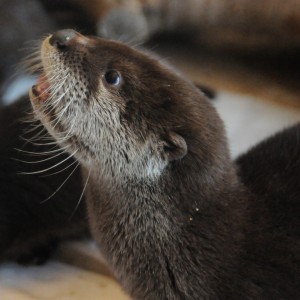 The home life of the otters is of particular interest to us at the Wildlife Center as we are serving, at least temporarily as mother to these three little ones. The male’s sole job is to initiate the family and one male will mate with several females. The female produces two to four offspring in a den along the banks of a river.  The young’s eyes are closed for the first five weeks of life and are covered in dark fur.  They will remain within the den for about two months and generally are not completely weaned until the age of four months.

Remarkably, for a creature so at home in the water, their first steps into that realm are very tenuous.  One of the mother’s jobs is teach them to swim.  We at the Wildlife Center can attest to that.  The two male otters were already familiar with the wet stuff but the young female that arrived the following day was not.  It was quite amusing to witness her ventures.  At first she kept clear of the pool.  However, as soon as she witnessed the two males splashing about and she had to join in.  She waded in water no more than an inch deep with her head held as high as she could hold it so as not to get it wet. 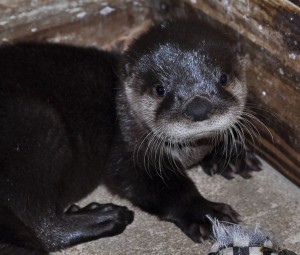 Now, three weeks later, she is a much more agile swimmer than the two others.  Feeding is another skill that has to be passed on from the mother.  The otters were just at the transition age from milk to solid food when they arrived at the Wildlife Center.  The volunteers there have helped them to progress from formula to chopped fish to whole fish.  Whole fish were then offered in the pool, games of keep-away were initiated and now the otters are chasing live minnows.  Once again the small female tops the class.  She has learned that the best time to feed is when she is standing on one of the male’s heads.  They can’t tell what she has caught at that point.  She is also quite good at keeping the males at arm’s length by maintaining a paw on their face.

Their feeding technique is fascinating to watch.  Their faces contain an array of whiskers on their muzzles and long stiff hairs on their eyebrows and chins.  With these they can detect the slightest movement in the water as well as keep in contact with objects in the pool.  Their short faces allow them to press those facial bristles into all of the nooks and crannies.  They may even be able to smell while underwater.  A current debate among researchers is underway on the subject.  Although otters actively close their nostrils while submerged, they can also be seen blowing bubbles out of their nose and quickly re-inhaling them, especially while investigating food sources. 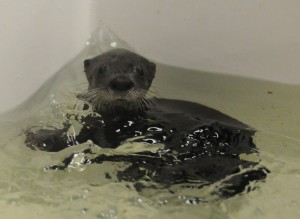 The rehabbers are also busily being trained by the otters.  Otters have a fairly wide range of vocalizations.  We have all come to recognize the sharp yip of “I’m awake and I’m hungry.”  There is also the low growl, almost a buzzing, that indicates they are annoyed.  We are, unfortunately, quite aware of the snarl and bark of the very unhappy otter which is emitted when the water is draining from the pool.  They know that playtime is over.  Of course, once they are out of the water and have dried themselves off, they fall fast asleep.

The three still have a good deal of growing to do.  They will not be independent until they are about a year old and will not reach their maximum growth until they are three.  They still need to develop their lighter-colored adult coat which will provide waterproofing, insulation and buoyancy.  What the future holds for our three charges is still unclear.

For Texas otters, in general, conditions are improving.  Texas Parks and Wildlife officials note that sightings are becoming more numerous.  Otters are being spotted in rivers and estuaries where they had been extirpated in the past due to over-harvesting.  Historically river otters were found as far west as Wichita Falls and all along the coast, but in recent years they were restricted to the pineywood forests of east Texas.  It is taken as a good sign that they are expanding back towards their original ranges.  Otters require very healthy rivers.  They are the top predator in their environment and there must be a generous supply of fish and crayfish to support their prodigious appetites.

We at the Wildlife Center of Texas are simply hoping what all rehabbers hope for, that we will be able to return our otters to the wild.  In the meantime, we recognize what a special opportunity it is to be able to work with such a unique and rarely seen creature.  So are there river otters in Houston?  You bet!  And hopefully there always will be.

A Postscript: The original three River Otters arrived from two separate locations and four days ago a fourth was brought to admissions at the Wildlife Center! They are getting big enough to need the next step in rehabilitation, a cage that is partway in a creek or lake and partway on land. They will be on their way to their new rehabilitation facility soon.